Vienna. 27 June 2018. FACC has scored yet another considerable success. The aerospace technology group impressed the top-class jury of experts and emerged as the silver winner of the Austrian Export Award 2018.

During the festive gala – the Exporters‘ Nite in the Museums Quartier in Vienna – Federal Minister Margarete Schramböck and President of the Austrian Economic Chamber (WKÖ) Harald Mahrer praised the above-average commitment of domestic companies in foreign markets. Robert Machtlinger, CEO of FACC, proudly accepted the Silver Export Award Trophy in the category Trade and Crafts. “The award is a particular honour for us,“ declared Robert Machtlinger. “The Export Award is a clear confirmation of our successful business activities beyond national borders. Our export quota of 99.7 per cent with a turnover of over 750 million euros was indeed the decisive factor of this coveted award.” 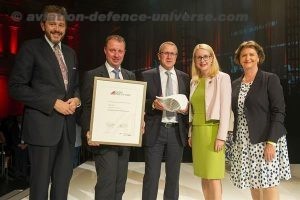 FACC Is Active on a Global Scale -Thanks to its clear corporate strategy and targeted investments in technology, quality and cost leadership, FACC is a model enterprise in terms of export: almost 100 per cent of the innovative composite solutions and technologies “Made in Austria” are exported. FACC generates approximately half of its sales in Europe, with Germany still being the most important market for one of the leading Austrian enterprise with more than 40 per cent of total sales, followed by the USA with 25 per cent. But it is primarily in the Asia-Pacific region, particularly the Middle East, China and India that FACC can record the largest growth rates. “These will also be the most promising markets for us in the future,“ commented Robert Machtlinger on the future prospects of the company. “Hardly any other industry is as internationally positioned as the aviation industry. A strong global footprint is an important element of FACC’s strategy. Our overriding goal is to strengthen the international presence of the company where its customers and their sales markets can be found.” As part of its growth strategy, FACC is expanding not only its domestic locations but also its subsidiaries abroad.  FACC is currently active in 13 countries.

The Austrian Export Award honours the above-average commitment and success of domestic companies in foreign markets. The prize, which is awarded annually by the Austrian Economic Chamber (WKÖ) and the Federal Ministry for Digitalisation and Business Location, honours the significant contribution made by exporters to Austria’s positive performance. Successful niche market policy and the marketing of special Austria-specific services or innovativeness in the export market serve as assessment criteria for the jury of experts. The President of the Austrian Economic Chamber Harald Mahrer explained, “The success of Austria’s export industry is causing a worldwide sensation. With this export prize we show our appreciation for Austria’s outstanding pioneers in export.”