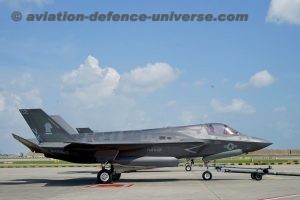 Singapore. 05 February 2018.  Singapore skies are seeing the roar and thunder of the F-35B  courtesy the U.S. Marine Corps squadron of F-35Bs is permanently based at MCAS Iwakuni, Japan. Singapore though has put on hold plans to procure up to 12 of the supersonic fifth-generation F-35B stealth multirole fighter jets for the Republic of Singapore Air Force (RSAF), upto 2022, the fighter will fly over the skies of the city during the show flying displays.

F-35B aircraft have been delivered to the U.S. Marines and the UK. U.S. STOVL aircraft are stationed at the first operational F-35B base, Marine Corps Air Station Yuma, Arizona, and Marine Corps Air Station Beaufort, South Carolina, where F-35B training is taking place. The first UK F-35Bs are located at RAF 17 Squadron, Edwards AFB, California, where operational testing is being conducted. The Italian Air Force will also operate the F-35B.