Eyes on Sky, Feet on Ground : Airports need to modernise themselves

Bangalore. 18 August 2018. There is rapid development that is taking place in terms of technology and even the people. Everyone wants things to be swift, better and easy and this includes the airport and air travel experience. Traicon Events hosted its 2nd annual airport modernization summit where the aviation sector bore witness to the new inventions and massive strides.

Javed Malik, Chief Operating officer, Bengaluru International Airport limited gave insight about Digi Yatra, an initiative to make flying simpler for passengers with only the use of mobile phones and Aadhar card. He concluded with details about the changes in the offing at the BIAL airport by the year-end.

This summit brought together over 120 government and private aviation sector stakeholders together to discuss the opportunities and challenges faced in regards to the development and modernization of the Indian aviation sector. The Airports Authority of India’s vision to make operational another 100 Airports across the Country in order to improve passenger experience and meet the Nation’s growing passenger and cargo traffic went hand in hand with the 2 day summit.

Subhir Bhatnagar from Avaaya, a company started by Alexander Graham Bell provided an insight about the different software that is better helping the aviation security like Avaaya Breeze which can identify people on a watch list and notify the authorities. Avaaya who were the silver sponsers for the event has been looking into best practices for airport security.
The summit continued with a talk from Sreekesh M K, General Manager, Johnson Controls, spoke about Johnson Controls solutions for the airport. Dr. Dewakar Goel, Associate, Indian Aviation Academy, touched upon the National Civil Aviation Policy and its plan and aim for the future like additional employment opportunity, the commercial aero manufacturing to come under defense offset program in the aeronautical arena under Make in India initiative.

V Muruganandam, Jt General Manager, Airport authority of India gave a talk regarding the impact of rapid air traffic growth and the need for a holistic approach to sustainable solutions. Mr. Muruganandam spoke about the future hope for Indian aviation like the use of GAGAN in every aircraft and the AAI Corporate Policy for 2017-2026.

With a huge growth in the number of Airlines, India as a country needs to develop and expand its airports to handle an additional 500-600 million passengers by 2030. The 55 new airports that are estimated to be required by 2030 will need 150,000 to 200,000 acres of land to be allocated for their development. All of this will require USD36-45 billion of investment keeping in mind that the government will provide the land at a subsidized rate.

Daniel Goh, vice president, Nuctech Company Ltd. The gold sponsors for the summit spoke about running highly efficient and cost effective airport operations. Goh spoke about the different Technologies being used at Changi Airport in Singapore like the CT scan for a better scan of the luggage.

The session continued with a panel Discussion which included Nandita Bhatt, Manvi Hooda, Javed Malik, Daniel Goh, and Dominic Fernandaz, moderated by Gurumukh Singh Bawa. The panel discussed about building sustainable smart and iconic airports of the future. The panel also discussed about queues which are inevitable in an airport, how the structure of the airport plays a huge hand in the smooth running of queues.

Arun Sheshanarayana, Head of IT projects, GMR Airport Developers Ltd. give a talk on the challenges of IT projects in airport modernization program. Balamurali Rengasami, Head – Design, Bangalore International Airport Ltd. gave a talk about assessing the need for public – private partnership projects to modernize airport levels and the privatization Strategies for the aviation sector. 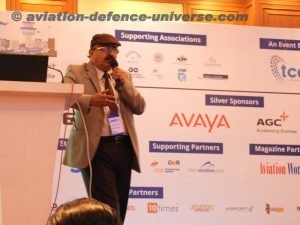 The Indian airport system is expected to exceed its maximum structural capacity by FY 2022 and this can only be achieved only if all the Airport development and expansion projects are completed on schedule. Hence, the Aviation sector is working on a number of privatization initiatives.The government is also developing a comprehensive 25-year master plan for airports developments in the country to keep pace with air traffic growth. The infrastructure at some of the top airports in the country is crippling while there has been a consistent double-digit growth in domestic air traffic for the past three years.
Nandita Bhatt, JT. General Manager Architecture, Airport Authority of India, spoke about designing the airport for tomorrow and exploring the potential of building management systems. She spoke about the necessity to design and build airport that would help the passengers have a better overall experience from departure till arrival. 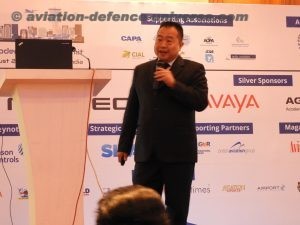 According to a recent study by the Centre for Asia Pacific Aviation (CAPA), the country’s airport system is expected to exceed its maximum structural capacity by FY 2022.It has been noted that 10 aerodromes under the Airports Authority of India are already operating “beyond their design capacity”, while other aerodromes at Mumbai, Chennai, Delhi and Kolkata will reach their maximum capacity in the next one year to five years. As per International Air Transport Association’s (IATA) 20-year passenger forecast, it has been projected that by 2036 India will be the third fastest growing market with an expected addition of 337 million new passengers from 141 passengers in 2016.It has also been stated that the most crucial aspects are safety and security of airports and there can’t be any compromise on these two counts.
Manoj Kumar Gangal, Airport director, Sardar Vallabhai Patel International Airport, give an insight into the customer delight at the Ahmedabad airport like the shopping experience, the architecture, the toiletries. Mr. Gangal spoke about the changes that Ahmedabad airport has gone through and also the way he allows for customer feedback. 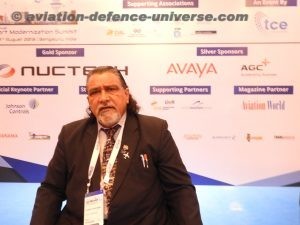 A team of the International Civil Aviation Organization (ICAO) was in India between November 6 and November 16 as part of its universal safety oversight audit programme. The team appraised six different areas, including personnel licencing, airworthiness, operations, legislation and organisation. They visited Chennai, Mumbai and that Civil Aviation Training College in Allahabad to inspect implementation of safety procedures laid down by the ICAO and India’s aviation regulatory body Directorate General of Civil Aviation (DGCA). Satisfied with the safety system put in place by the safety regulator,” according to a statement issued by the Ministry of Civil Aviation. The audit involved verification of response provided by the DGCA to certain protocol questions sent by the ICAO.
Gurumukh Singh Bawa, senior aviation Consultant talk about the flexibility in operations being a tool for bottom line Optimization. Instead of the panel discussion on the second day the floor is open for the audience to ask questions to any of the esteemed speakers.
Aviation sector expansion will continue to be instrumental to India’s growth, as the Government of India advances $110 billion in civil aviation expansion and modernization projects through 2020. By that time, India is projected to become the world’s third largest aviation market, handling 336 million domestic and 85 million international passengers annually.