Where has ECHS gone wrong? 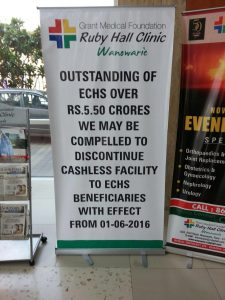 New Delhi. 10 June 2016. Today it is Pune, tomorrow it will be somewhere else and for all one knows there could be many more such Ruby Halls  already existing in the country. Ex-Servicemen Contributory Health Scheme (ECHS) cashless facilities have been discontinued to beneficiaries due to an outstanding of over Rs. 5.50 Crores  from 01-06-16.

Speaking to ex-servicemen  and by the virtue belonging to a family of one I realised only those living in Delhi and Chandigarh were happy with the ECHS Polyclinics and empaneled hospitals, the others had sordid tales of woe to tell.

It is pathetic to see that a scheme which started with goodwill and welfare should come to such a condition. Is ECHS finding it difficult to serve the ex-servicemen and their families? Is there a crunch in finances that it is making it difficult  to pay the dues to empaneled hospitals and is there a lack of cash at the Polyclinics level to procurement medicines both routine and life saving?

Non availability of funds with the MD ECHS has had a cascading adverse effect on planning and execution of healthcare of ECHS members. Super Specialty Hospitals and other good hospitals are not offering themselves to be empanelled because of the non clearance of their bills in time.  Suggestion was given by ex servicemen  to MD ECHS to clear 50 percent of the hospital bills within one week of receipt of the bills and remaining 50 percent be cleared within 30 days, after due evaluation, analysis and verification.  Ex servicemen  are told that such a proposal is lying with Secy DESW for a considerable time for approval.

A large number of good Super Specialty Hospitals initially empanelled with ECHS, have withdrawn for want of clearance of their bills and the remaining empanelled hospitals are also under financial stress and on the verge of discontinuing empanelment.    The required funds need to be released well in time to ensure smooth execution ECHS.

ECHS  was launched with effect from 01 April 2003. The Scheme aims to provide allopathic Medicare to Ex-servicemen pensioner and their dependents through a network of ECHS Polyclinics, Service medical facilities and civil empanelled/Govt hospitals spread across the country. The Scheme has been structured on the lines of CGHS to ensure cashless transactions, as far as possible, for the patients and is financed by the Govt of India.

ECHS is a flagship Scheme of the Ministry of Defence, Department of Ex-Servicemen Welafre. The aim of Scheme is to provide quality healthcare of Ex-servicemen pensioners and their dependents. As on date, a total of 13,48,517 Ex-servicemen have enlisted with the Scheme along with 30,03,577 dependents. Total beneficiaries of the Scheme, thus amount to 43,52,094.

Policy framework for the Scheme is laid down by the Governmentt and executive control is exercised by the Department of Ex-servicemen Welfare. The Scheme is managed through the existing infrastructure of the Armed Forces so as to minimize the administrative expenditure. The existing infrastructure includes command and control structure, spare capacity of Service Medical facilities (Hospitals and Medical Inspection Rooms), procurement organization for medical and non-medical equipment, Defence land and buildings etc. Station Commanders assisted by Senior Executive Medical Officers (SEMO) exercise direct control over the ECHS Polyclinics.

There are nearly 30  Regional Centres sanctioned by the Govt and ECHS Polyclinics are designed to provide ‘Out Patient Care’ which includes consultation, essential investigation and provision of medicines. Specialized consultations, investigations and ‘In Patient Care’ (Hospitalization) is provided through spare capacity available in Service hospitals and through civil hospitals empanelled with ECHS. Polyclinics are categorized as Type A to E based on the number of Ex-servicemen residing in that area.

The ECHS currently has over 40 lakh beneficiaries. This number is going to steadily increase in the future and is expected to stabilize at 65 lakhs by 2020. So where has the ECHS gone wrong? It started with a great aim but somewhere down the lane lost the focus. Or is the growing ex-servicemen fraternity so large that ECHS cannot bear the costs of treatment in private hospitals? Perhaps it can learn a lesson or two from its better run big brother CGHS.