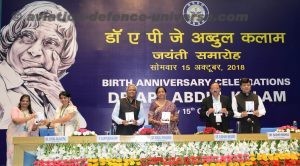 A function in DRDO Bhawan  was held in the presence of Defence Minister Nirmala Sitharaman , Minster of State for Defence, Dr Subhash Ramrao Bhamre, and Prof K Vijay Raghavan Principal Scientific Advisor (PSA) to the Government of India, along with other dignitaries.

Speaking on the occasion  Sitharaman shared her experience of meeting with Dr Kalam. She said, he was not only a good scientist but also an excellent administrator who could spot and nurture talent among his team members. That among others made this ‘missile man’ a great team leader. 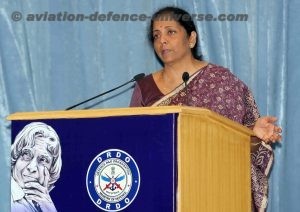 Addressing the gathering, MOS said, Dr Kalam believed in a strong nation – one that is scientifically superior and always used to inspire people for putting their total commitment towards the mission in hand. This can be gauged in his words, “If you want to 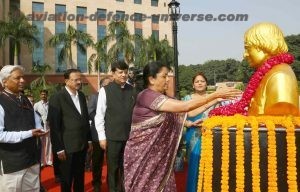 Defence Minister also launched a DRDO website dedicated to the theme ‘The Kalam Vision – Dare to Dream’ for engaging young minds in emerging technologies namely Artificial intelligence, Cyber security, Robotics, Automonous Systems, etc. The website will facilitate open competition for students and Startups. It is available at the address: https://drdo.gov.in/drdo/kalam/kalam.html.

Hindi version of the book “Incredible Kalam” was released by  Dr Bhamre  so that message of Dr Kalam can reach to the masses of the country. The book is the compilation of personal experiences of some distinguished scientists about their association with Kalam. 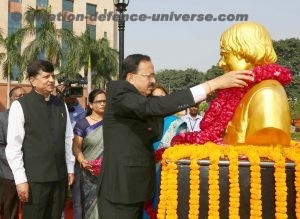 The Minister of State for Defence, Dr. Subhash Ramrao Bhamre garlanding the bust of the former President of India and DRDO Chief, Dr. A.P.J. Abdul Kalam, on his 87th Birth Anniversary, at DRDO Bhawan, New Delhi.

The function was attended by Students of three Delhi based schools. These schools have set up Atal Tinkering Lab in their schools under Atal innovation mission of Government of India. Students and researchers from Indian Institute of Technology (IIT) Delhi also attended the function. The aim of inviting young minds was to motivate them with diverse and great qualities of Dr A P J Abdul Kalam, who had special affinity for students and youth of the country. Young scientists from DRDO laboratories delivered presentations at the function regarding the innovative projects they have undertaken.

The students were taken to visit the Kalam Gallery at DRDO Bhawan to get a glimpse of defence systems and technologies displayed. Students took keen interest in the life and work of Dr Kalam depicted in the gallery.