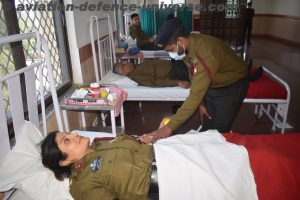 New Delhi. 27 December 2022. In line with the ongoing series of events in the Southern part of the country, in the run up to the Army Day 2023, Indian Army formations/units located in various parts of Maharashtra, Goa, Karnataka, Kerala, Telangana, Tamil Nadu, Gujarat, Rajasthan, Madhya Pradesh & Uttar Pradesh undertook a massive blood donation drive on 24 December 2022. This humanitarian drive by the Indian Army was undertaken in coordination with prominent civil hospitals and social organisations to ensure that the donated blood units reach the needy patients in time. 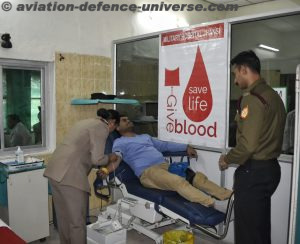 Organized under the theme ‘Donate Blood – Save Lives’, to commemorate the forthcoming 75th Army Day on 15 January 2023, 7,500 units of blood were collected through voluntary donation and a data bank of 75,000 volunteers was compiled. The blood donation campaign saw an overwhelming response from Army personnel & their dependents, Civil Defence Employees, NCC Cadets, College Students, Army Public School teachers and volunteers from all walks of life. These camps were organised in all major cities as well as remote areas across 10 states in Southern Command area of responsibility.

The list of places across Southern Command where the blood donation drive was organised is appended below:-

The blood donation event organised has contributed immensely to renew the Soldier-Citizen connect & reaffirmed the commitment of Indian Army to stand shoulder to shoulder with our Citizens.