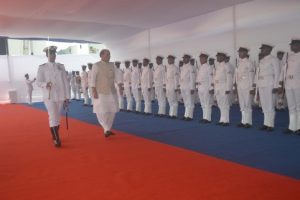 New Delhi.09 Sep 2016. Indian Coast Guard Ship “Sarathi” third ship in the series of six Off Shore Patrol Vessels (OPV) was commissioned at Goa by Rajnath Singh,  Home Minister of India.   ‘Sarathi’ meaning ‘Charioteer’ is a projection of Indian Coast Guard’s will and commitment “To serve and protect” the maritime interest of the nation.

The ship draws 2500 tons(GRT) propelled by two 9100 KW diesel engines to attain a maximum speed of 26 Knots and have an endurance of 6500 NM at economical speed. The sustenance and reach coupled with the latest and modern equipment and systems, provides her the capability to perform the role of a command platform and accomplish all Coast Guard charter of duties. 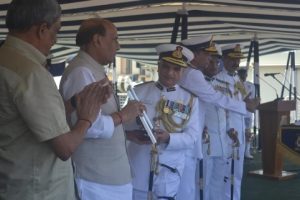 The ship on joining Coast Guard Fleet will be based at Kochi and will form part of the Naval Training Squadron. In addition, the ship will be deployed for the EEZ surveillance and other duties to safeguard the maritime interests of India. Presently, Indian Coast Guard has a Fleet of 123 Ships/ boats, further 68 Ships/boats are at various stages of construction at different shipyards. With the commissioning of this vessel and other assets, the Indian Coast Guard will emerge as a stronger and potent force to address the emerging security challenges in maritime zone of India.

ICGS Sarathi will be commanded by Commandant Atul Joshi and manned by 14 officers & 98 men. The ship will be under the administrative and operational control of the Commander, Coast Guard Region (West).

The commissioning of ICGS Sarathi will enhance the Indian Coast Guard’s operational capability to discharge the multifarious maritime tasks. With the increased threat from sea borne terrorism, the induction of a sophisticated and state-of-the-art OPV will give a fillip to the maritime security of our vast coastline and in particular the Maritime State of Kerala and Island territories of L&M.