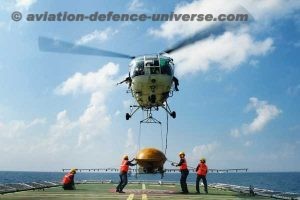 The Regional  Level Marine Oil Pollution Response Exercise titled ‘Clean Sea – 2017’, was conducted at sea off Port Blair on 29 Nov 17. The exercise was preceded by a table top exercise on 28 Nov 17. The objective of the exercise was to ascertain preparedness of the Indian Coast Guard, resource agencies and other stakeholders in responding to a major oil spill in line with the provisions of NOS-DCP (National Oil Spill Disaster Contingency Plan). The highlight of the exercise was participation of one ICG Pollution Control Vessel (PCV) and integration of Indian Coast Guard Dornier/Chetak aircraft into the Oil Spill Disaster Management System for aerial assessment/ delivery of Oil Spill Dispersant (OSD) for mitigation of the spilled oil. Representatives from various stake holders also participated in the exercise as observers. 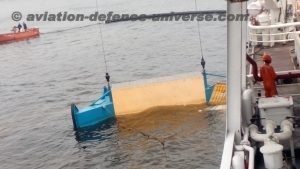 Indian Coast Guard is responsible for marine environment protection in the maritime zones of India and is the coordinating authority for response to oil spills in Indian waters. The Force has drawn up a National Oil Spill Disaster Contingency Plan (NOSDCP) and has established three pollution response centres at Mumbai, Chennai and Port Blair. A robust National system for oil spill response is critical. The Great Channel between the Nicobar Islands and Northern Sumatra that leads into the Malacca Straits is the Marine Drive of the high seas. Almost 200 ships cross the 160-km wide Straits daily making it among the busiest sea routes of the world. Considering the tanker traffic through this route, the area is highly vulnerable to oil spills. In case of any spill due tanker accident, the likelihood of it reaching the shores of eco-sensitive islands is very high and this may cause irreversible harm to the flora & fauna causing imbalance to the bio diversity which includes endangering marine species, damaging virgin beaches, coastline, mangroves, corals, fishery and marine protected areas. Besides tanker traffic through six degree channel, ten degree and coco channel also see significant daily traffic of large merchant vessels passing through. Preservation and protection of the sensitive ecology and marine environment of these pristine A&N Islands is a collective responsibility of all of us. We are duty bound to preserve and protect marine environment from the risk of oil pollution at sea.

The exercise was therefore planned to evaluate the preparedness for Response Operations for any such oil pollution incident in this highly sensitive area. The support and cooperation provided by all stakeholders, is indicative of the resolve and firmness in combating oil spills in such sensitive areas. The exercise was conducted in two phases. A table top exercise was conducted on 28 Nov 17. A scenario was given to the participants and different situations were injected during the table top exercise. The participants undertook mapping of sensitive areas and prioritized their response.

Seven ICG ships and two aircraft including one PCV, OPV, Chetak helicopter and Dornier aircraft each, Merchant Vessel Manav Star and one Tug from PMB participated in the exercise. Further, a total of 19 participants from nine stakeholders and resource agencies participated in the table top exercise. 31 Representatives from the resource agencies, stakeholders and Andaman administration as observers embarked Coast Guard Ship Vishwast for witnessing the exercise at sea.

Exercise ‘Clean Sea’ validated and reinforced response mechanism for Oil Pollution incidents and enabled Indian Coast Guard to fine tune the actions required in such eventualities by improving coordination and communication with different agencies. All out efforts are being made with the synergy of stakeholders through such exercises to extend GoI policy of “Swachh Bharat Abhiyan” to Maritime Zones of India through “Swachh Sagar Abhiyan” also, as 64% of world oil trade pass through the Andaman Sea. Representatives from electronic and print media also witnessed the exercise.