Indian naval platforms get the best in Brahmos 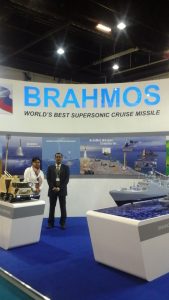 Paris. 22 October 2016. As one of the two and the only Indian government joint venture representing India at Euronaval this year, Brahmos attracted a lot of attention.

The integration of the company’s BRAHMOS missile continues on various classes of Indian Navy surface vessels. Named after the Brahmaputra and Moscow Rivers, the Brahmos anti-ship missile is a joint Indian-Russian program. Developed through the 1990s and early 2000s, Brahmos is one of the few anti-ship missiles built during this time. It is currently in service with the Indian Armed Forces.

The is a short-range ramjet supersonic cruise missile that can be launched from submarines, ships, aircraft or land. It is a joint venture between the Russian Federation’s NPO Mashinostroeyenia and India’s Defence Research and Development Organisation (DRDO) who have together formed BrahMos Aerospace. It is based on the Russian P-800 Oniks cruise missile and other similar sea-skimming Russian cruise missile technology. The name BrahMos is a portmanteau formed from the names of two rivers, the Brahmaputra of India and the Moskva of Russia.

In an informal chat the representative of  Brahmos informed that integration efforts continue on many classes and the vessels already in receipt of successful integration include at least one frigate class and one destroyer class.

The ship-launched anti-ship version of Brahmos can fly at supersonic speed barely 3-4 metres above the surface of the sea, making it ideal for stealth attack against enemy ships. It is the world’s fastest anti-ship cruise missile in operation. The missile travels at speeds of Mach 2.8 to 3.0. A hypersonic version of the missile, BrahMos-II, is also presently under development with speed of Mach 7-8 to boost aerial fast strike capability. It is expected to be ready for testing by 2017.

Though India had wanted the BrahMos to be based on a mid range cruise missile like P-700 Granit its propulsion is based on the Russian missile, and missile guidance has been developed by BrahMos Aerospace. The missile is expected to reach a total order worth US$13 billion. The Indian Navy’s BrahMos missiles mostly uses eight-cell Vertical Launch System launchers. Six of its frigates and two destroyers have a single BrahMos launcher, while three of its destroyers have twin launchers. More BrahMos equipped ships are under construction.

The Navy has also successfully tested in 2013 a submarine-launched version which is expected to enter service in future vessels. Submarine-launched BrahMoses could potentially be launched fairly close to the target without being detected.

In 2016, as India became a member of the MTCR, India and Russia are now planning to jointly develop a new generation of Brahmos missiles with 600 km-plus range and an ability to hit protected targets with pinpoint accuracy. DRDO has designed and developed five different launchers for the PJ-10 supersonic antiship cruise missile, BrahMos. The launches have been installed and successfully used in seven flight trials of the missile.