Denver, July 19, 2022 — Boom Supersonic, the company building the world’s fastest airliner, optimized for speed, safety, and sustainability, today announced an agreement with Safran Landing Systems to become  key supplier on the Overture program at the Farnborough International Airshow. Carrying 65–80 passengers at twice the speed of today’s airliners and running on 100% sustainable aviation fuel (SAF), Overture will fly Mach 1.7 over water with a range of 4,250 nautical miles. 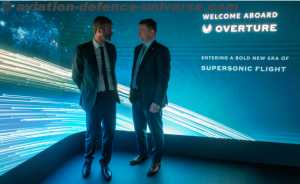 “Boom is committed to making the world dramatically more accessible via supersonic flight,” said Kathy Savitt, Boom’s President. “Safran brings more than a century of aircraft equipment design and manufacturing expertise to the Overture program, and we’re proud to collaborate with them to build the future of travel.”

The first system to be co-developed between Safran and Boom will be the Overture landing systems. Technical teams at Safran Landing Systems and Boom will focus on incorporating the latest technology improve aircraft safety, optimize weight, and reduce aircraft noise. “At Safran, we are constantly innovating to integrate sustainability into our engineering and manufacturing processes, which is an important value we share with Boom,” said Florence Minisclou, Executive Vice President, Customer Directorate at Safran. “It is an incredible opportunity to provide our expertise for a product that we believe has the ability to completely transform passenger air travel, and ensure we incorporate sustainable practices in our design methodologies.”

Boom also announced today that it would partner with Northrop Grumman to offer a special mission variant of Overture to government and military customers. Later this year, Boom will start construction on The Iron Bird testing facility in Colorado and break ground on the Overture Superfactory in North Carolina.