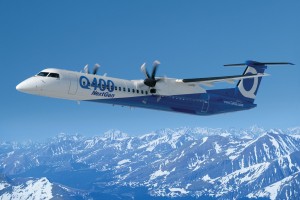 September. Bombardier Commercial Aircraft announced today that the National Civil Aviation Agency of Brazil, locally known as ANAC, has awarded type certification approval to Bombardier’s 86-seat Q400 aircraft for operation in the region. The Type Certificate, signifying the local airworthiness of the largest commercial turboprop in-service worldwide, was presented to Bombardier in a ceremony held at ANAC’s offices in Sao Jose dos Campos, Brazil.”Expanding our commercial aircraft presence in the Latin American market is key to our global expansion strategy and obtaining the Q400 aircraft’s type certification marks an important step in placing aircraft in the region,” said Alex Glock, Regional Vice President, Sales, Latin America & the Caribbean, Bombardier Commercial Aircraft. “With its operational capability and versatility, the modern, reliable and fuel-efficient Q400 aircraft will serve the growth-oriented needs of Brazil’s airline industry and prove to be an excellent asset to local operators’ portfolios as they look to expand routes, right-size and develop their networks.””The addition of the Q400 aircraft’s type certification is significant for Brazil which continues to evolve as a result of organic growth and local investment in infrastructure,” said Dino Ishikura Airworthiness Superintendent, ANAC. “We are pleased to certify the aircraft reflecting the advancements being made to Brazil’s regional aviation landscape.”In July 2015, Canada and Brazil signed a Memorandum of Understanding (MOU) on civil aviation to promote and expand cooperation to the mutual benefit of both countries. This MOU will help bring together key Canadian and Brazilian public and private stakeholders to discuss collaboration and cooperation in areas such as airport development, air navigation, and safety.Bombardier Commercial Aircraft has a Regional Sales and Marketing Office (RSMO) and parts services depot in Sao Paulo, supported by a dedicated team of local and international experts. The Latin American sales, marketing and customer services team will be strengthened further as the central office is staffed to fully support the region.

Published in CIVIL AVIATION and OEMs