Developed, produced and integrated by the strong partnership between Boeing and BAE Systems, EPAWSS represents a transformational overhaul to the survivability of the F-15 by providing advanced capabilities to detect and counter ground and airborne threats while also improving battlefield situational awareness. 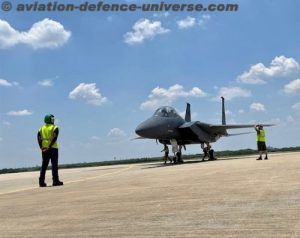 “The Eagle Passive Active Warning Survivability System makes the most of mission effectiveness and survivability for the F-15 in contested environments, and further strengthens a highly capable, lethal aircraft,” said Prat Kumar, vice president of F-15 Programs. “With EPAWSS, the F-15E and F-15EX have successfully proven they can perform across a large force environment to penetrate advanced enemy air defenses and improve mission flexibility.”

In May 2021, the first two F-15EX aircraft, delivered ahead of schedule, participated in Northern Edge exercises with the EPAWSS suite. During the highly contested and complex exercises, the two jets  demonstrated operational potential, which set the stage for future incremental improvements, allowing the jets to exhibit proven, outstanding performance in subsequent exercises and flight test missions in October 2021 and February 2022.

As a leading global aerospace company, Boeing develops, manufactures and services commercial airplanes, defense products and space systems for customers in more than 150 countries. As a top U.S. exporter, the company leverages the talents of a global supplier base to advance economic opportunity, sustainability and community impact. Boeing’s diverse team is committed to innovating for the future, leading with sustainability, and cultivating a culture based on the company’s core values of safety, quality and integrity.