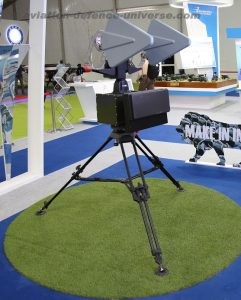 Chennai, 12th April 2018. Nowadays, drones are familiar flying objects. As with any other technology, drones are used and misused. Drones are threats to military establishments and strategic civilian locations. Drones are easily launched by adversaries for spying and causing damage to these establishments. Countering such drones is essential for security agencies. BEL has developed an indigenous ‘Drone Guard ‘solution to support these agencies.
BEL’s Drone Guard System (DGS) has been configured to detect, track and neutralise the intruding drones. The System utilises RF spectrum to detect the drone and EO-IR sensor to track the drone continuously. The neutraliser is initiated to scan and identify the target’s communication frequencies and generate RF jamming signal to neutralise the target. The System is capable of bringing down the drone by hampering its communication link as well as blinding its GPS source. The System can be operated in semi-automatic / manual mode through user friendly GUIs. This portable and agile system can also be configured to be vehicle mounted as per the User’s requirement.