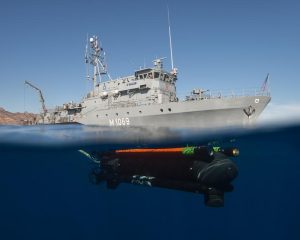 Bremen. 23 December 2016. ATLAS ELEKTRONIK has received an order from the Federal Office of Bundeswehr Equipment, Information Technology and In-Service Support (BAAINBw) for the modernization of three minehunting vessels of the Frankenthal class (Type 332) in service with the German Navy. The corresponding contract, with a volume of about 78.5 million Euros, was signed by the parties today at the BAAINBw in Koblenz.

The objective of this project, which bears the designation MJ 332 CL, is to equip the three boats with the Integrated Mine Counter Measure System (IMCMS) and the underwater vehicle SeaFox of ATLAS ELEKTRONIK GmbH. On top of that, the vessels will be given the capability for controlling the “Seehund” ROV, which until now has only been integrated on the minesweepers of the Ensdorf class (Type 352). In addition to the shipboard adaptations, a shorebased training and testing facility is to be established and taken into service. The project is planned to run until 2020.

The German Navy currently has ten minehunting vessels of the Frankenthal class in service. Five boats were already fitted out with the IMCMS and SeaFox by ATLAS ELEKTRONIK GmbH in 2009 and 2012. For the three units now to follow, this project aims to ensure the uniformity of the minehunting combat system and the capability of using the underwater vehicle on a total of eight units. The remaining two boats will be used as mission platforms for mine clearance divers.