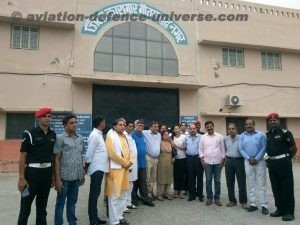 Outside the jail immediately after Col Chauhan’s release

• Civil-military relations at their lowest ebb
By Brig.VK Atray.
New Delhi. 20 August 2018. Police brutality and abuse of power must be done away with if citizens are to trust the police for their safety and well-being. But in a nation where even an ex-army officer is a victim of this behavior of the police, civil-military relations are actually at their lowest ebb. After five days of being put in jail under a fake case by the NOIDA Police Col.VPS Chauhan came out on bail today.

Col Chauhan while speaking to ADU at Arun Vihar Institute  NOIDA, after being released from  jail , thanked the entire army fraternity and felt deep gratitude for all the support and hoped to repay some day. He said he would now like to hit back and will escalate the fight . 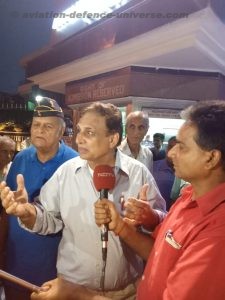 Meanwhile the absconding ADM has applied for anticipatory bail in Allahabad High Court . Colonel VPS Chauhan has been a victim of high handedness of local police under the influence of Harish Chandra who is ADM Muzaffarnagar. The incident occurred on 14th August in Arun Vihar Noida ,when Col Chauhan was waiting for a cab in a park opposite his house . At that time Usha Chandra wife of Harish Chandra along with his gunman & other staff approached Colonel Chauhan ,had an altercation and called police on 100 ,which man handled , handcuffed and arrested Col Chauhan on the charges of kidnapping , molestation and SC /ST Act .
This was despite the fact that the CCTV footage of 1.36 minutes showing the manhandling of Col Chauhan by Harish Chandra , Usha Chandra and gunman was handed over to Police. Col Chauhan was arrested around 6:30 a.m; medical done by about 10 am, ,taken to Surajpur District Court and produced in front of Judge late – so that no time is left for appeal – and sent to Jail by about 4 pm .

Police also arrested the servant of Col Chauhan and two trainees who had come from Gorakhpur. It is a case of vengeance as Harish Chandra- living on the first floor in the same building where Col Chauhan lived on ground floor-had carried out illegal construction . Having failed to put sense Col Chauhan approached NOIDA authorities to remove the encroachment which was done partially. It appears to be a preplanned operation orchestrated under the influence of the said ADM. 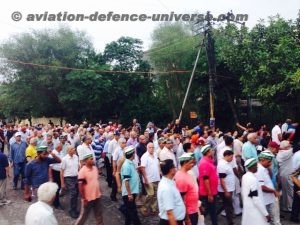 Colonel Chauhan is from the daredevil Para unit who participated in Hajipir operations, 1971 Indo Pak war and capture of Siachin Glacier. Later he was the Principal of Indian Institute of Mountaineering and Skiing. A decorated soldier who has been awarded 16 medals . Post retirement he has been training the youth of UP to join army ,free of cost. 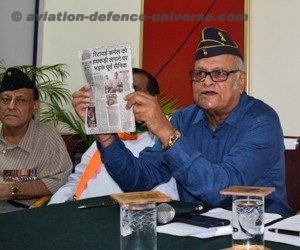 The agitated veterans of Noida got together to fight for justice. Colonel Shashi Vaid was the moving force who motivated the veterans and galvanised the support of the media which culminated in raising the issue at the highest level of UP Govt & the Army . A Press Conference on the issue was held on 16 August and it was highlighted that the highhandedness of those who can utilize their status to harm, insult & humiliate the Veterans will not be tolerated .On 18 August a protest march was taken to the Shahid Smark in Noida which was led by the wife of Col Chauhan. Seeing the gravity of situation DM Noida has transferred the CO and SHO .

And this is not the end of a tale gone wrong. The rulings will be left to the courts and judges but police high-handedness needs a proactive response by society. Due process of law is normally sidetracked, which entails granting suspects their rights. The police should employ system of accountability for its officers in  case that standard procedures are not followed. However the truth still remains that arrests can be made and handcuffs can be released after quick phone calls.