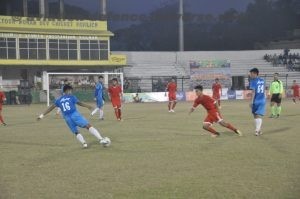 New Delhi, 15 Feb 2018. Army Green outperformed Mizoram in a fantastic game of football in the Final Match of 32nd Assam Rifles – N M Gupta Memorial Football Tournament 2018 which was co-sponsored under Op Sadbhavana. Both the teams showcased their best performance of the tournament so far. However, it was Army Green who came out triumphant winning the match 1-0 courtesy a solitary goal. They had won this trophy earlier in 2016. Along with the coveted Trophy, Army Green also bagged a cash prize of Rs 5 Lakhs which is one of the highest prize money for Football Tournaments played under AIFF. Mizoram won the KC Sen Trophy for Runners Up and a cash prize of Rs 2 Lakhs. Assam State Electricity Board and Assam Regimental Centre won the 3rd and 4th positions with cash prizes of Rs 60,000 and 40,000 respectively.

Inspector General Assam Rifles (East) had organised this tournament under Op Sadbhavana of Spear Corps for the third consecutive time in association with the District Sports Association, Silchar from 31 January to 13 February 2018 which was aimed at reviving the importance of this tournament and increasing the bonhomie between Security Forces, civil administration and the local population in the region. 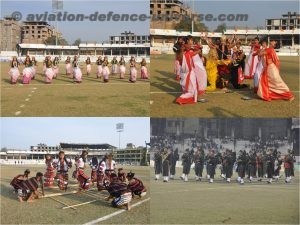 This edition of the tournament was contested by ten renowned teams. Shri NS Jamwal, Inspector General BSF (Mizoram & Cachar Frontier) was the chief guest. Maj Gen Upendra Dwivedi, Inspector General Assam Rifles East expressed his gratitude to the DSA, civil administration and people of Silchar for supporting this tournament. Ms Sushmita Dev, Hon’ble MP from Silchar, and many other dignitaries were also present during the ceremony. Earlier, the closing ceremony of the tournament was organised which was attended by a crowd of over 5000 local citizens of Silchar. Cultural programmes were presented by students from various schools of Silchar, NCC cadets and Pipe Band of Assam Rifles. 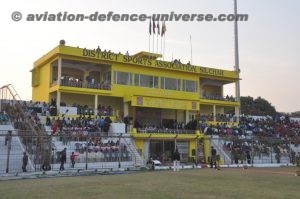 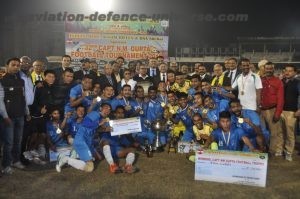