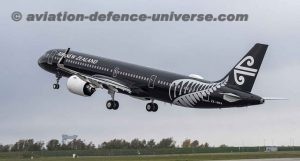 Hamburg, Germany. 05 November 2018. Pratt & Whitney and Air New Zealand, have celebrated the delivery of the airline’s first A321neo aircraft powered by Pratt & Whitney GTF™ engines and backed by an EngineWise™ service agreement for up to 16 years.

“Air New Zealand has been a Pratt & Whitney customer for more than five decades, dating back to when its forerunner, Tasman Empire Airways Limited operated the Douglas DC-8 powered by the JT3D engine,” said Rick Deurloo, senior vice president of sales, marketing and customer support at Pratt & Whitney. “We’re thrilled to expand our relationship with Air New Zealand and support their GTF-powered fleet, which will enable them to realize fuel savings and environmental benefits for years to come.”

Since entering into service in early 2016, the GTF engine has demonstrated its promised ability to reduce fuel burn by 16 percent, to reduce NOx emissions by 50 percent to the regulatory standard and to lower the noise footprint by 75 percent.

Published in Airlines and Engine Makers