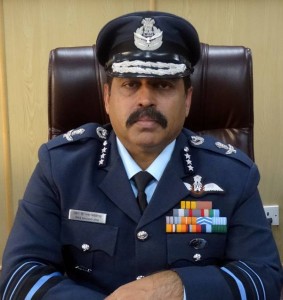 New Delhi. 01 January, 2016. Air Marshal Rakesh Kumar Singh Bhadauria took over as Deputy Chief of the Air Staff today.  He is an alumnus of the National Defence Academy and was commissioned in the IAF in June 1980.  Prior to taking over as DCAS, Air Marshal Bhadauria was Senior Air Staff Officer at  Central Air Command of IAF.

He is an Experimental Test Pilot,  Cat ‘A’ Qualified Flying Instructor and Pilot Attack Instructor with over 4200 hours of experience on over twenty five types of fighter and transport aircraft.  Air Marshal Bhadauria completed his Staff Course and Masters in Defence Studies from Command and Staff College, Bangladesh.

Air Marshal Bhadauria is a recipient of Ati Vishisht Seva Medal and Vayu Sena Medal conferred in 2013 and 2002 respectively. He is married to Mrs. Asha Bhadauria and is blessed with a daughter and a son.