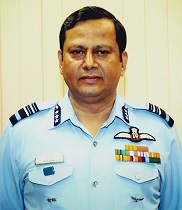 New Delhi. 31 July 2016. Air Marshal B Suresh AVSM VM assumes charge as Air Officer-in-Charge Personnel (AOP). A graduate of the ‘Rashtriya Indian Military College’, Dehradun and ‘National Defence Academy’ Kharakvasla, the Air Marshal was commissioned as a fighter pilot in the Indian Air Force on 13 Dec 1980.
He is a meritorious graduate of the ‘Tactics and Air Combat Development Establishment’ (TACDE), a graduate of the ‘Defence Services Staff College’ Wellington and a post graduate from Cranfield University, Shrivenham UK. He commanded No.2 Squadron – The Winged Arrows – as a Wing Commander, TACDE as a Group Captain and a strategic fighter base as an Air Commodore. He is a highly experienced fighter pilot who has flown a variety of fighter aircraft and helicopters.