Aero India starts with thunders in the sky & expectancy on ground 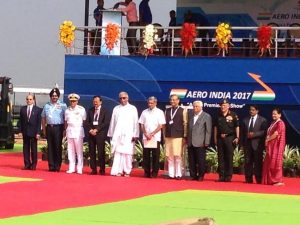 By Rohit Ratan Saxena
Bangalore. 14 February 2017. Aero India dazzled the sky with thundering birds and grounded the focus on Make- in-India. Starting with a high powered ceremony sans the weight of the PM like last time, spectacular flying display, the day rooted in indigenisation as the mantra and foreign OEMs more than enthusiastic to be a part of the Make-in-India bandwagon, the day was full of its surprise packages.
Mi17 helicopters carrying the Indian tricolour led the  Light Utility Helicopters (LUHs) made by Hindustan Aeronautics Ltd (HAL) escorted by Cheetahs, followed by the Rudra and Dhanush formation of ALH Mark IV and the red and yellow metal birds saluting Air Force Station Yelahanka by flying in a Y formation, all made the adrenalin gush.Indian helicopter display team Sarang and and the fixed wing Surya Kiran and ‘SKYCATS- Scandinavian Air Show’ aerobatics teams got the loudest applause as always. Creating a memory for the books Surya Kiran Aerobatics Team (SKAT) marked their 500th public display since formation in 1996. As always these men and women of the IAF made the nation proud.The audience watched with bated breath manoeuvres performed by HTT-40, LCH, LUH, Tiger Moth, LCA (Tejas), Sukhoi Su-30MKI, Gripen, Rafale, F16 and Pilatus PC-7 aircraft.

For the first time Aero India is a team work by Ministries of Defence and Civil Aviation in India, leaving a thought that will India Aviation held every even-year at Hyderabad become history and Aero India expand to encompass the commercial aviation like Paris, Farnborough, Berlin  and many others.
Army Chief Gen Bipin Rawat, Air Force Chief Air Chief Marshal B S Dhanoa and Navy Chief Admiral Sunil Lanba were also present as the event being inaugurated by the Minister of Defence Manohar Parrikar with Minister of Civil Aviation Ashok Gajapathy Raju and his junior minister Jayant Sinha.
Global aerospace giants are in the process of one-upmanship in pitching themselves to get there slice in the billion dollars worth Indian cake. The show has exhibitors from the US, France, UK, Russia, Israel, Germany, Belgium, Switzerland, Ukraine, Singapore, Sweden, Spain, South Africa, Italy, the UAE, South Korea, Hong Kong, the Czech Republic, Canada, Australia, Poland and Greece. 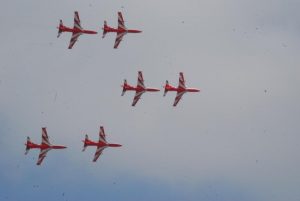 The Indian Air Force inducted its first indigenously developed airborne early warning and control (AEW&C) system, mounted on a Brazilian Embraer-145 jet, giving a fillip to its capability. The Netra AEW&C system has been developed by the Defence Research and Development Organisation (DRDO) and has a range of around 200 km.

Stealth, manned-unmanned teaming, Ground Based Air Defence weapon Systems (GBADWS) and  the UAS (Unmanned Aerial Systems) all seem to be the stories of the day and in the making. And Russian and Israeli technologies are the ones which are attracting a major attention. OEMs are displaying the SAM ( Surface to Air Missiles) systems like the the VSHORADs, SRSAMs, QRSAMs, and MRSAMs,( Very Short, Short. Quick Reaction and Medium Range SAMs).

A total of 549 companies are taking part in the event, of which 270 are Indian and 279 foreign. About two lakh business visitors are expected to attend the show, in which 72 aircraft are participating, according to the organisers.
Share this on WhatsApp