All roads lead to Langkawi and all eyes on its skies 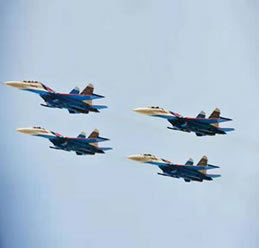 Langkawi, 17 March 2017. All roads lead to Langkawi and eyes are on its skies. It is LIMA 2017 in the offing. Langkawi International Maritime and Aerospace Exhibition (LIMA) is a maritime and aerospace exhibition that takes place once every two years in Langkawi, Malaysia. The next event will take place in from 21st march onwards..

The event  is focused mainly on the defence industry, but also supports civilian industries. In 2013, LIMA recorded an overall growth of 10%, with 433 exhibitors from 31 countries, 333 defence delegations from 38 countries, 632 media personnel from 127 agencies, 68 ships and 78 aircraft attending the show. The 5 day event also saw 38,421 trade visitors from both defense and commercial sectors from all around the world,[1] as well as 135,691 public visitors.

Confirmed space bookings has seen a 40% percent increase compared to the previous edition in 2015. Russia is currently once again the largest international country exhibitor followed by the United States. Germany and the United Kingdom. Out of these. 9 new countries of first-time exhibitors bringing innovative. new products to Asian markets are from Austria. Brazil, Estonia. Hong Kong, The Netherlands, Philippines, Poland. Thailand and Ukraine.