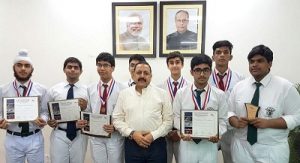 New Delhi. 05 July 2016. And the younger generation of Indians finds yet another reason to make the nation proud. Twelve Indian students have been selected to participate in the prestigious “International Space Settlement Design Competition” (ISSDC) at NASA (National Aeronautics and Space Administration) in Florida, US.

It is no small achievement as this students team was selected through a very rigorous and objective competition at continental level. Their names were finalized for the international finals only after they won the Asian regional round against teams from countries including Pakistan, China, Japan and Korea, he added.

This was disclosed here by Union Minister of State (Independent Charge) for Development of North Eastern Region (DoNER), Minister of State (Independent Charge) for Youth Affairs and Sports, MoS PMO, Personnel, Public Grievances, Pensions, Atomic Energy and Space, Dr Jitendra Singh when he invited these students here yesterday, for an interactive session on the eve of their departure for Florida.

Hailing the achievement of the children, all of whom are from Class 10 to 12 from Delhi Public School, R.K. Puram, New Delhi, Dr Jitendra Singh said, India has huge science talent waiting to be streamlined. In the field of Space Technology particularly, he said, as a result of Prime Minister Shri Narendra Modi’s added impetus to various projects at the ISRO (Indian Space Research Organization) and also the universally acclaimed success of Mars Mission, more and more youngsters are feeling inspired to try their skill and innovative aptitude in the field of Space Technology.

Dr Jitendra Singh said that the team of 12 students which is leaving for the Space competition at NASA, not only deserves every kind of encouragement, but, in addition, their success story should be widely propagated among school children across the country, so that those with hidden talent for Space experimentation may be able to realize their talent and at the same time also become aware of the various options currently available across the world for developing their scientific skills.

The Minister assured the young scientists of all possible help from Government of India. He said, besides Department of Space, which is directly dealt by him, he will also request the Ministry of Science and Technology to work out a suitable mechanism to support the scientific growth of these youngsters.
Dr Jitendra Singh said that it will be a great learning experience not only for these boys but also for their peers across the country when, at NASA, they go through the proposed competitive process of designing a “City in Space” that can be a home for over 10,000 people.