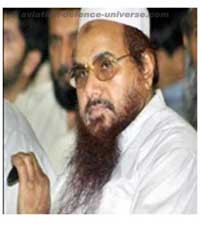 New Delhi. 27 December 2017. House No. 116E, Mohalla Johar, Lahore, Tehsil, Lahore City, Lahore District, Pakistan- an address which houses the most wanted not only for India but also for the world of today. Hafiz Saeed who is the Chief of Jammat-ud-Dawa (J-u-D) and founder member of Lashker-e-Toiba (L-e-T) was officially released from this house after a house arrest last month.

US President Donald Trump who has adopted a stringent posture against terrorism has warned Pakistan numerous times not to provide safe-haven to terrorists. He again cautioned Pakistan about the release of “notorious terrorist” Hafiz Saeed. Sarah Huckabee Sanders the press secretary of US president issued a statement recently that “If Pakistan does not take action to lawfully detain Saeed and charge him for his crimes; its inaction will have repercussions for bilateral relations and for Pakistan’s global reputation.”

The hard-hitting press release further mentions that if Pakistan would not stop protecting terrorists it would be a great looser. Trump’s South Asia policy is against terrorism and it expects that Pakistan would stop its policy of harbouring diverse terrorist outfits and would take harsh actions against terrorist organisations which are active in the country. These terrorist outfits are a great danger to the whole world especially to the region. The release of L-e-T leader and mastermind of November 2008 Mumbai attacks in which about 166 persons including six Americans were killed and about 308 innocent persons were injured is certainly a step on wrong direction. It clearly indicates that Pakistan is not sincere in its fight against terrorism.

Again on December 20, after the reports surfaced that Hafiz Saeed has constituted a political party and would contest general elections the spokes person of State Department Heather Nauert told press “I want to remind folks we have a $10 million Reward” for Hafiz Saeed and US have “concerns about him running for office”. He further mentioned that US is ready to share intelligence about Hafiz Saeed with Pakistan government so that they can punish him.

In contrast to previous US Presidents, Trump has adopted a stringent policy against terrorism and against Pakistan which sponsors terrorism. The earlier US administration gave long rope to Pakistan although it had ample evidence that the country was abetting terrorism and there are diverse terrorist outfits which were either created or assisted by Inter Service Intelligence (ISI). The rogue intelligence agency as well as terrorist outfits sponsored by it are running various terrorist training centres at several places especially in Pakistan Occupied Kashmir, Khyber Pakhtunkhwa and in The Federally Administered Tribal Areas (FATA). In these training centres training was given by serving or retired Pakistan army personnel. The preceding US governments thought that if they would abandon Pakistan and stop financial assistance the country may become a rogue state and the terrorists would get a free hand in the state.

Nevertheless Trump administration took bold step and all the bigwigs boldly and constantly cautioning Pakistan to amend its ways. These honest and blunt statements of President and other important US officials took Pakistan to the corner and slowly and steadily it is being isolated. Even the 9th BRICS (Brazil, Russia, India, China and South Africa) summit hosted by China at Xiamen in September 2017 had to include the names of L-e-T and Jaish-e-Mohammed as terrorist organisations.

L-e-T is a banned terrorist organisation and there is a reward of USD 10 million on Hafiz Saeed hence he must be arrested immediately. United Nations Security Council Resolution 1267 in December 2008 and US Department of Treasury designated Saeed a Specially Designated Global Terrorist.

The Trump administration has issued tough and threatening warnings to Pakistan but nothing tangible has emerged so far. Hence Trump administration must do something substantial for example US should withdraw Pakistan’s status of a non-NATO ally as withdrawal would forfeit few military and financial benefits given to Pakistan. US can also proclaim Pakistan as sponsor of terrorism. US has already announced some cuts in financial assistance and refusal of Pakistan’s demand for subsidize sale of F-16 fighter planes but these measures are not enough.

In fact there is a strong demand in US to stop assistance to Pakistan as it is assisting various terrorist outfits including Haqqani group which is constantly attacking US led NATO troops in Afghanistan. A recent Pentagon report specifically mentions that Taliban and Haqqani Network have full freedom to operate in Pakistan and the terrorist outfits also get assistance from Pakistan government. The report further mentions that although Pakistan government has destroyed few terrorist camps but these terrorist outfits have established camps at other places and operating from relocated camps. The report clearly mentions that several terrorist groups including Haqqani Network, L-e-T, Al Qaeda, Al-Qaeda in the Indian Subcontinent (AQIS), Islamic State (IS), Tehrik-e-Taliban Pakistan (TTP) and Islamic Movement of Uzbekistan are active in Pakistan and sinister ISI assists them.

Although several countries of the world including US and India criticised, release of J-u-D Chief Hafiz Saeed from house arrest but the notorious terrorist which has full support of all powerful Pakistani army was freed in November. Army and its intelligence wing ISI have launched a low intensity war against India and they are involved in carrying out terrorist activities in whole of India especially in Jammu & Kashmir and Hafiz Saeed and his outfits are implementing the dictates of ISI.

Few days back Pakistan army Chief General Qammar Javed Bajwa in an “in-camera-session” of the Senate Committee session reiterated that Hafiz Saeed can play “an active role” in resolving Kashmir issue. General Bajwa gave this statement just few days after the statement of General Pervez Musharraf (Retd) mastermind of Kargil war that L-e-T and J-u-D are patriotic parties and he would be happy to form alliance with these parties for “safety and security” of the country. General Musharraf likes to come back to Pakistan after forging alliance from these terrorist organisations.

Hafiz Saeed constituted Milli Muslim League (MML) a political party which will contest 2018 general election in Pakistan. The election commissioner refused to register MML as a political party but Pakistan watchers mention that election commissioner has refused because of international pressure but soon the party under same or changed name would be registered as MML was created by Pakistan army to counter Pakistan Muslim League (N) in the forthcoming elections. Sheikh Yaqoob contested recently held by- elections in Lahore against Begum Kulsum. The seat was fallen vacant as former Prime Minister Nawaz Sharif was disqualified. The religious fervor is increasing in Pakistan as in the election two candidates of religious parties secured 11 percent votes minimizing the vote share of PML (N). Sheikh Yaqoob who was designated a terrorist in 2012 by USA secured 5 percent of votes which also expresses the mood of the nation.

MML which is waiting for registration declared that it will contest another by-poll scheduled to be held in Peshawar next month. Mosques were also used in the election campaign and MML campaign was well organised and there was no dearth of finance. Sheikh Yaqoob stated that his party is encouraged by the election results and will contest all seats in 2018 general elections after registration of the party. He mentioned that common Pakistani want merger of Kashmir and stringent actions against USA and India. Fundamentalism has increased manifold in Pakistan and mosques would play vital role in elections hence in other elections MML would certainly win few seats and can share power with other parties. If MML share power then besides controlling foreign policy towards India, USA and Israel it will also control nuclear warheads which will be a dangerous phenomenon.

ISI has created few terrorist outfits to carryout terrorist activities in India and Afghanistan now it wants that these groups should be inducted in politics. ISI also gave this proposal to Prime Minister Sharif but he rejected it. Now the rogue intelligence agency is implementing it after ouster of Sharif. ISI proposes that once these terrorist leaders join active politics they would leave terrorism. MML was constituted within two weeks of ouster of Sharif.

Besides Saeed another US designated terrorist Fazlur Rehman Khalil of Ansar-ul-Umma also told to constitute a new political party as he mentioned that Pakistan needs “patriotic” persons. The leaders of these fanatic parties would survive on anti-India slogans and India-Pakistan relations would deteriorate further. These parties would impose primitive form of Islam ruthlessly in Pakistan and proclaim that they would spread Islam in whole region including India. Fundamentalism would enhance in the country and the atrocities on minorities and Shias would enhance. Terrorist outfits which toe the line of ISI would be given more liberal assistance hence the attacks on US led NATO troops in Afghanistan would increase and these terrorist outfits would try to carry out more terrorist activities in Kashmir hence the chances of war between India and Pakistan would also enhance.

Jai Kumar Verma is a Delhi-based strategic analyst and a retired senior intelligence officer. The views in the article are solely the author’s. He can be contacted at [email protected]