Titagarh Wagons to launch a ship for Indian Navy 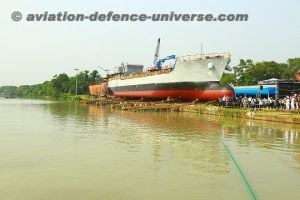 New Delhi, 18th May, 2018: Titagarh Wagons Limited (BSE: 532966|NSE: TWL), a flagship company of the Titagarh Group, has reiterated its commitment towards the Government’s vision of ‘Make in India’, by successfully launching the first of the four vessels being built for Indian Navy and Ministry of Earth Sciences respectively.  On 9th of May, 2017, Titagarh had successfully started the construction of two 1000T fuel barges for Indian Navy and two Coastal Research Vessels for National Institute of Ocean Technology (under Ministry of Earth Sciences, Govt. of India) at their Titagarh Shipyard at B.T. Road near Kolkata. The newly launched ship Fuel Barge 14 which has been specially designed for carrying fuel mid-sea to Indian Navy’s flagship aircraft carrier INS VIKRAMADITYA, will depart for Mumbai Dockyard of Indian Navy for delivery, soon after various trials including machinery trials and speed trials.

Over the years, TWL has efficaciously transformed itself from being a well-known wagons and coaches (EMU/DEMU) manufacturer for Indian Railways to a multinational diversified engineering and fabrication group. The second vessel for Indian Navy is scheduled for a launch in July, 2018 and NIOT vessels thereafter. 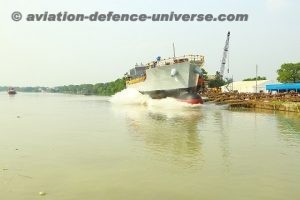 Jagdish Prasad Chowdhary, Chairman, Titagarh Wagons Limited, stated, “We are proud as a private manufacturer today that with broadening of horizons in our businesses we could launch our first ship for the Indian Navy before time and feel privileged to be a significant part of the Make in India campaign. I firmly believe that this milestone will complement our growth strategy in years to come. By entrusting the construction of these four highly complex and technologically advanced vessels with us, the Indian Navy and NIOT have reposed great faith and trust in Titagarh Group’s capabilities and dedication towards innovation and diversified portfolio. We are thankful to all the dignitaries who have devoted their precious time today here with us to mark this auspicious and spectacular occasion.”

Titagarh Wagons has already obtained new orders from Government of West Bengal for building small boats and has participated in various tenders where the results should come out in next six-eight months. These orders are likely to be  from Indian Navy, Indian Coast Guard, Inland Waterways Authority of India, Shipping Corporation of India. 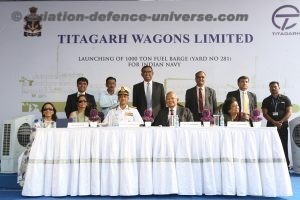 Vice Admiral M. S. Pawar, Chief of Staff, Eastern Naval Command, Indian Navy, said, “The contribution made by Titagarh towards meeting the Navy’s growing requirements of state-of-art ships for its fleet is commendable. On behalf of Indian Navy, I would like to take this opportunity to congratulate the team of designers, engineers, technicians, quality controllers and the members of the Naval overseeing team for their untiring efforts in successfully achieving this significant milestone of launching the first 1000T vessel to support INS Vikramaditya well ahead of schedule.”

These four ships were the first tenders won by Titagarh Wagons post the Company’s foray into ship building business vertical in the beginning of 2017. The Company had signed contracts attuned to INR 100 crore and INR 75 crore with National Institute of Ocean Technology under the Ministry of Earth Sciences, Government of India and Ministry of Defence (Navy), Directorate of Ship Production respectively. Today, with the launch of its first ship much before the deadline, the Company manifested its capability in delivering all four ships ahead of contractual schedule.

Umesh Chowdhary, Vice Chairman & Managing Director, Titagarh Wagons Limited, said: “We are a key player in the railways, urban transport and defence sectors. From a premier Company in wagon manufacturing, we have transformed into a diversified multinational making coaches for local trains, metro coaches as well as passenger trains and shipbuilding apart from special projects for India’s defence establishment. Titagarh Wagons is the only Indian Company to have access to technology for manufacture of Metro Coaches through its wholly owned subsidiary Titagarh Firema S.p.A in Italy. We forayed into shipbuilding last year with 2 significant orders from Indian Navy and National Institute of Ocean Technology for building 4 highly complex vessels. It is a moment of great satisfaction that as a Company we are substantially contributing to India’s naval security and helping to augment research technology.”

Titagarh Wagons are drawing up the layouts and planning the facilities of the next phase of ship building at Kulpi. As globally, the shipbuilding market is awaiting revival, the Company’s investment would depend on the macro economic conditions. Titagarh Wagons has always been proactive in technological innovation through its multiple business verticals by developing new designs of wagons and now shipbuilding, keeping in line with the ‘Make in India’ vision of the Indian Government.