The SkyStar 180 is in operational use by the French Army 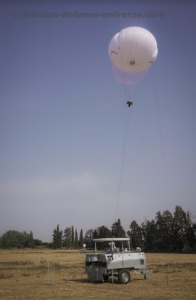 Paris. 12 June 2018. The Israeli-based aerostat company RT LTA Systems Ltd. is participating at Eurosatory, and presenting its SkyStar family of aerostats, which includes the Skystar 110, SkyStar 180 and SkyStar 330. During the exhibition in Paris, the company discloses its current leasing agreement with the French army.

Rami Shmueli, RT’s CEO said,  “The SkyStar 180 aerostat system is currently in operational use by the French army, under a leasing agreement. We look at the French Army and the French nation, which are very important for us, as one of the leading forces in the world, and we are honored to provide our leading SkyStar 180 aerostat system to support their mission.  I can already say that the feedback we are getting from them is positive”.

The SkyStar aerostats are a self-contained, versatile, and easily transportable tactical systems, ideal for defense, border security, HLS and public safety missions. Offering availability of over 85% in any given area, the SkyStar systems already accumulated more than 1,500,000 million operational hours worldwide.

The SkyStar 180 is a small-sized mobile aerostat, designed for tactical mid-range surveillance and public safety, as well as for police and military applications. Based on a towable trailer, the system has a stabilized day/night electro-optical payload suspended from a helium-filled aerostat, tethered to a ground system. It operates continuously at wind velocity of up to 40 knots,and can lift a payload of up to 20kg, providing surveillance coverage from an altitude of up to 1,000 ft. for up to 72 hours, after which it is brought down for a 20-minute helium refill. Only 2 people are required to fully maintain the system. SkyStar 180 is Ideal for defense, security, border control and public safety missions.