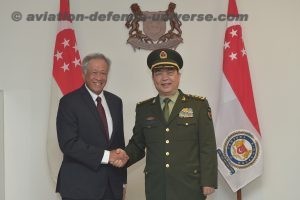 “We call it as it is, we don’t sugarcoat things and we don’t stick our heads in the sand, but at the same time we don’t just complain or highlight that there’s a problem, we actively look for solutions,” he says in a recent interview with The Straits Times.

“And even if we can’t have a complete solution, we at least don’t make it worse. We try to explore at least some preliminary steps which can improve the situation.”

Taking over as Chairman of ASEAN, Singapore will help broker talks on a Code of Conduct (COC) on the South China Sea. The talks start formally this year after ASEAN and China agreed on a framework for the code last year.

Dr Balakrishnan notes that the South China Sea situation is “much more calm now”, and he does not want to put a deadline on the code.

“The whole point of the COC is that it’s not going to resolve the competing or overlapping claims, but it is meant to maintain the peace, prevent accidents, prevent misunderstandings and to prevent escalation to a situation that nobody wants to get into,” he says.

To put into perspective, China has overlapping territorial claims in the South China Sea with four ASEAN states – Malaysia, Vietnam, the Philippines and Brunei. But a giant leap forward is the attest of China and Asean of the agreed framework of code last year.

Singapore, too, wasn’t spared when it underwent some rocky patch with China. But high delegation visit and exchanges from Singapore to China and vice-versa has put the track back on high optimism.

Dr Ng, in his Facebook post made it clear he was “happy and honoured” to host General Chang whom he has referred to as his “good friend”. He has accepted Gen Chang’s invitation to this year’s Xiangshan Forum in September 2018. He also welcomed high-level visits from China’s People’s Liberation Army to Singapore.

4th March in History
View All
Did You Know This?

4th March in History
View All
Battle Ground COVID 19
Did You Know This?