Paris. 21 September, 2017. Safran Electrical & Power was granted the prestigious Airbus “Best Performer Award” at the Airbus Supplier Awards ceremony held in Tianjin, China. The company was rewarded for its tremendous improvement in program management and in solving all kinds of technical issues, as well as for establishing an open relationship built on trust and one in which commitments are honored.
This award, endorsed by the executive committee of Airbus, acknowledges Safran’s top-level performance and engagement. Earlier in 2017, Safran Electrical & Power also received the “Gold Supplier” prize and the “Best Improver” award for Aerolec – a joint venture (60/40) between Safran Electrical and Thales – from the Airbus SQIP team, which recognizes excellence in delivery and quality performance. Every department at Safran Electrical & Power contributed to rebuilding trust and transparency with Airbus through excellent programs. Today, the collaboration between the two companies’ teams is treasured. 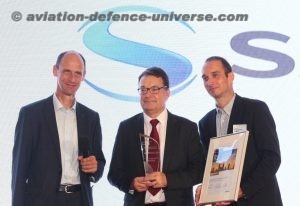 A couple of years ago, the historical context of the electrical generation systems’ activity did not work in Safran’s favor. Airbus and Safran Electrical & Power therefore agreed to draw up a great recovery plan addressing all functions and taking every area into account. All Safran Electrical & Power employees, and especially in the France sites of the Power division (Réau and Toulouse) and the Pitstone site (England), implemented this improvement plan and helped to turn the situation around by adapting pre-established standards. The expected results were achieved through effort and teamwork, recording, to date, 100% on-time delivery (OTD) over the past 20 months and a quality performance maintained above the Airbus target over the same period.
“This ‘Best Performer Award’ is a great honor. We now have to make sure we keep up the good work, and strengthen all the processes to ensure that what we have achieved is maintained in the months and years ahead,” declares Alain Sauret, President, Safran Electrical & Power. “We managed to straighten up every aspect of our relationship, highlighting our customer focus, of course, as well as our quick response time and improved confidence and transparency between our teams. I can safely conclude that over the last two years, a truly special relationship has developed between our companies.

All Safran Electrical & Power employees, and in particular from the Power division, which is largely considered as the driving force of the recovery plan, can be proud of their engagement and achievement. And this award is the proof of that,” concludes Hervé Blanc, Vice President & General Manager Power.