Raytheon projects T-X as the perfect trainer for USAF 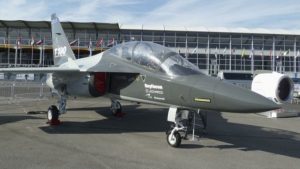 Farnborough, UK. 13 July 2016.The delai in issue of RFP doesn’t seem to have deterred Raytheon from its enthusiasm of projecting T-100 as the future of training in USAF.

For the forthcoming T-X program to replace 450 USAF Northrop T-38 Talon trainers, the Alenia Aermacchi M-346, in its proposed Raytheon avatar the T-100 seems to be the most popular.

Speaking to  journalists at the show, Dan Darnell, vice-president for strategic initiatives within Raytheon’s Space and Airborne Systems business, said, “for T-X the company is proposing a fully integrated solution that can put the student pilot through just about any air event.”

According to him M-346-based T-100, which the team led by Raytheon is bidding for the US Air Force’s T-X future trainer requirement, was the only T-X contender on the official briefing schedule at the show here.

It is known that Raytheon has teamed with Leonardo erstwhile Finmeccanica  to offer the T-100 which is tried and tested as is already in service with the air forces of Italy, Singapore, and Israel. It is also on order for Poland. A retired USAF three-star General , Darnell reiterated that  the T-100 is a mature solution for the USAF’s T-X requirement for 350 aircraft. The rumour is that the numbers required could go up double fold, but he did not comment on it.

Darnell informed that CAE will be  providing the ground-based simulators, and Honeywell Aerospace the  twin F124 turbofans and 70 percent of work on the aircraft and training system would be undertaken in the US.  He confirmed that  Raytheon is in the process of selecting a site for the  final assembly in the US of the T-100, should it win the competition.

Given the aircraft and simulators are already in use, he said that Raytheon would only need 30 months from a contract award to the training of the first US students. Five training bases are envisaged in the US, with 40 ground-based training systems, he said.

Raytheon envisages that the Blended Live Virtual Constructive (BLVC) training, which facilitates any combination of live and simulated flight within a training sortie and allows student pilots flying real aircraft to see and interact with other pilots flying simulators., will be the USP of the trainer.

After completing a review of remaining tasks, on 18 March 2016 the Air Force Program Executive Officer for Mobility determined that the Advanced Pilot Training (T-X) Program’s Request for Proposal (RFP) would be delayed by three months. The program office now anticipated an RFP release in late December 2016 to ensure the release of a well-defined RFP.

The Program’s aim to refine RFP language stemmed from its participation as a pilot program for the US Air Force’s Bending the Cost Curve (BTCC) initiative. The BTCC initiative seeks to increase competition and find solutions that work for both the US Air Force and industry. Program activities to refine RFP language, including extensive dialogue with industry, have taken longer than initially anticipated to complete.

It may be recalled that General Dynamics was initially the US prime contractor for the T-100, till April 2015 when it pulled out of T-X and Raytheon took over.