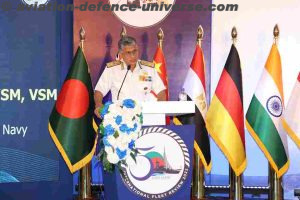 HE Sheikh Hasina, Hon’ble Prime Minister of the People’s Republic of Bangladesh reviewed
the International Fleet comprising ships from Bangladesh Navy and eight ships from six foreign countries. With three ships, the Indian Navy contingent was the largest amongst the participating foreign navies in this IFR. The other five participating ships were from China, Malaysia, Myanmar, Thailand and USA. 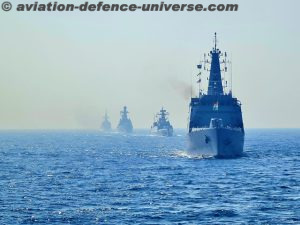 The three ships representing the Indian Navy, the Guided Missile Destroyer INS Kochi, Anti- Submarine Warfare Corvette INS Kavaratti and Offshore Patrol Vessel Sumedha are all indigenously designed and constructed warships. The presence of these ships at this multinational event at Bangladesh contributed towards showcasing the indigenous shipbuilding capabilities of Indian Shipyards.

On the side-lines of the IFR, VAdm B Dasgupta called on Admiral M Shaheen Iqbal, the
Chief of Naval Staff of Bangladesh Navy. He also held bilateral interactions with heads of
delegations from Iran, Maldives, Myanmar, RoK and USA.

This was the first International Fleet Review to be hosted by Bangladesh. The IFR
complements the celebrations of 50 years of liberation of Bangladesh and the ‘Swarnim Vijay
Varsh’ as well as the ‘Maitri Diwas’ celebrated on 06 December every year, marking the
establishment of formal diplomatic relations between India and Bangladesh.

The presence of the Indian Navy at the maiden IFR hosted by Bangladesh was thus an
apt reiteration of strong bilateral relations between India and Bangladesh and the role of the
Indian Navy in strengthening defence cooperation in the maritime domain.