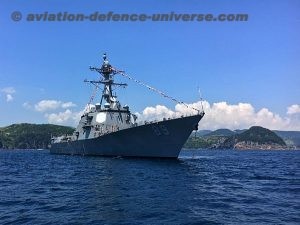 Singapore. 08 April 2018. THIS is a matter of fact: From America’s Founding Fathers to the present day, the relationship between China and the United States has been a close and complicated dance.

Neither friends nor foes, there’s mutual admiration and emulation, hopes raised and dashed, with cooperation and competition, betrayal and disillusionment.

The latest showing of the gloves came with China claiming it was provoked in late March when the US Navy destroyer Mustin sailed near the disputed isle in South China Sea.

Apparently, from a US perspective, it was carrying out “freedom of navigation” operation within 12 nautical miles of an artificial island built by China.

The destroyer travelled close to Mischief Reef in the Spratly Islands and carried out maneuvering operations. For the record, 12 nautical miles is an internationally recognised territorial limit.

But Beijing reacted instantly and two Chinese naval ships were sent to identify the US ship and warn it to leave. As such action leading to misjudgment or accident, could easily lead both countries into serious political and military provocation for China.

From a China view-point, the action of the American ship is an indication of harming China’s sovereignty and security, which threatens regional peace and stability.

Going by the US books, it did not infringe the international standards. In fact, the US reiterated that its forces operate in the region on a daily basis, in accordance to international law.

“We conduct routine and regular freedom of navigation operations, as we have done in the past and will continue to do the same in the future,” said Lieutenant Commander Nicole Schwegman, a spokesman for the US Pacific Fleet. In January, a US Navy destroyer sailed near Scarborough Shoal, a disputed lagoon claimed by China in the South China Sea.

For sometime now, China has been in the spotlight as it brought tension to neighbouring countries. The South China Sea dispute involve both island and maritime claims among several sovereign states within the region, namely Brunei, the People’s Republic of China (PRC), Taiwan, Malaysia, Indonesia, the Philippines and Vietnam.

With an estimate of more than US$5 trillion of global trade that passes through the South China Sea, it is the intent of the claimant states that the South China Sea remain in international waters. And to promote this, several states, including the United States conduct “freedom of navigation” operations.

China’s creation of seven man-made islands in the South China Sea as it further militarised the region to bolster its claims. Subi, Mischief and Fiery Cross reefs are part of the Spratly chain, which is claimed in whole or in part by China, the Philippines, Vietnam, Malaysia, Taiwan and Brunei.

But a Chinese Foreign Ministry spokesman made it clear that “China’s position on the South China Sea issue is clear, consistent and remains unchanged”. He adds: “China has indisputable sovereignty over the Nansha Islands (Spratly Islands) and the adjacent waters.

“We stand firm in safeguarding our territorial sovereignty and maritime rights and interests in the South China Sea. We are committed to peaceful settlement of the relevant disputes in South China Sea through negotiations with countries directly concerned.”

Observers believe while the US exercises its freedom of navigation in the South China Sea, this could just push China to become more dominant and aggressive in the region. And with a potential trade war on the horizon, retaliation is not something the affected nations envisage.