New Delhi. 04 August 2022. Nancy Pelosi’s visit to Taiwan not only leaves a bad taste in China’s mouth but also Xi Jinping squirming. Less than 24 hours of Pelosi’s stay in Taiwan and China has started it’s targeted military operations against Taiwan.

The Eastern Theatre Command of the Chinese People’s Liberation Army (PLA) is holding joint combat training exercises in the northern, southwestern and south eastern waters and airspace off the Taiwan Island , involving troops from the Navy, Air Force, Rocket Force, Strategic Support Force and Logistic Support Force under the Eastern Theatre Command. The exercises focus on key training sessions including joint blockade, sea target assault, strike on ground targets, airspace control operation, and the joint combat capabilities of the troops got tested in the military operations. A reverse muscle flexing by China and its show of displeasure to Taiwan.

US House Speaker Nancy Pelosi said in a statement on the night of August 2 that “Our congressional delegation’s visit to Taiwan honours America’s unwavering commitment to supporting Taiwan’s vibrant democracy. America’s solidarity with the 23 million people of Taiwan is more important today than ever, as the world faces a choice between autocracy and democracy.” A strong statement echoing the President of America’s message who happens to be a Democrat too. 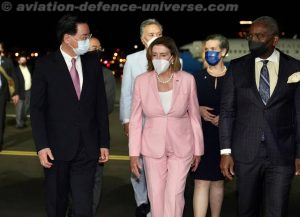 Beginning from the evening of Aug. 2, the PLA Eastern Theatre Command has successively launched a series of joint military operations around the Taiwan Island. Naval-air joint drills were carried out in the north, southwest and southeast waters and airspace off the Taiwan Island. In addition, combat troops under the theater command will conduct long-range strike live shooting in the Taiwan Strait, and conventional missile firepower test launching in the eastern waters off the Taiwan Island.

“This round of joint military operations is a necessary response to the dangerous move made by the US and Taiwan authorities on the Taiwan question. The Eastern Theatre Command has organized troops of multiple services and arms to conduct targeted training exercises of joint blockade, strikes on land and maritime targets, airspace control operations as well as the live firing of precision-guided munitions. While comprehensively verifying the performance of the equipment and the joint combat capability of the troops, we have made full preparedness for all crisis situations,” said Maj. Gen. Gu Zhong, deputy chief of staff of the PLA Eastern Theatre Command.

He sternly warned that those who visit Taiwan with evil motives and the “Taiwan Independence” forces must know that the PLA Eastern Theatre Command troops are fully confident and capable of fighting off any provocations to firmly safeguard China’s sovereignty and territorial integrity.

Meanwhile China on the diplomatic front reacted strongly through the official spokesperson, Hua Chunying, “ the nature of her visit is absolutely not about democracy, but about China’s sovereignty and territorial integrity. What she has done is definitely not about upholding or defending democracy, but a provocation and infringement on China’s sovereignty and territorial integrity.

Meanwhile the State Councilor and Foreign Minister Wang Yi said  that China will punish those who offend China, which the spokesperson reiterated by stating that, China will do everything necessary to firmly uphold its sovereignty and territorial integrity. All consequences arising therefrom shall be borne by the US side and the “Taiwan independence” separatist forces. 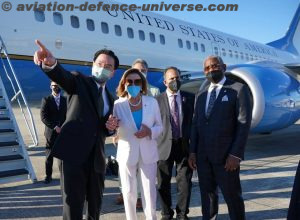 Global Times the official newspaper commented, “On Pelosi’s visit to Taiwan, US officials now try to justify it and even to shift blame. For example, White House National Security Advisor Jake Sullivan said that “China tries to turn what is in the historical norm into a crisis” and is the one “who’d be escalating”. National Security Council Coordinator for Strategic Communications at the White House John Kirby said that this visit doesn’t violate the US’s one-China policy.”

The spokesperson added, “There is only one China in the world, and Taiwan is part of China. The Government of the People’s Republic of China is the sole legal government representing the entire China. This is at the heart of the one-China principle and also a universal consensus of the international community and a basic norm in international relations. In October 1971, the 26th Session of the United Nations General Assembly adopted Resolution 2758, which “decides to restore all its rights to the People’s Republic of China and to recognize the representatives of its Government as the only legitimate representatives of China to the United Nations, and to expel forthwith the representatives of Chiang Kai-shek from the place which they unlawfully occupy at the United Nations and in all the organizations related to it.” A total of 181 countries, including the US, have established diplomatic ties with China on the basis of the one-China principle. Historically, the Taiwan question once represented the main roadblock to the normalization of China-US relations. China stood firm on the one-China principle and would not make any compromise or concession on that issue. In 1971, the US affirmed to China the new principles that it would follow with regard to the Taiwan question. They include, the US would acknowledge that there is only one China in the world and Taiwan is a part of China; the US would not repeat the phrase that the status of Taiwan is undetermined; the US had not supported, and would not support movements for “Taiwan independence”. When President Nixon visited China in 1972, he reaffirmed those principles to Premier Zhou Enlai, and hence the Shanghai Communiqué.” 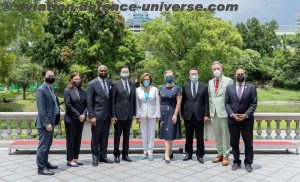 China strongly stated, “However, in recent years, the US has not matched its words with deeds. It has been distorting, altering, obscuring, and hollowing out the one-China principle and trying to cross red lines and pushing the boundaries. It has used all means to play the “Taiwan card”, deliberately switched policy interpretations, and inserted its unilaterally concocted “Taiwan Relations Act” and “Six Assurances” part into the one-China policy. It has even at one point dropped key formulations such as “Taiwan is part of China” on the website of the State Department. The US has also brazenly sought to upgrade US-Taiwan relations, increase arms sales to Taiwan and embolden the “Taiwan independence” separatist activities. The US government was supposed to rein in the attempt to visit Taiwan by its third highest ranking member. However, the US government has connived at this provocation. This is the root cause and truth behind the tensions in the Taiwan Strait. 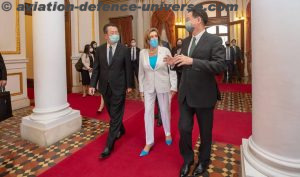 On the other hand China’s friend  Russia has formally stated that it firmly adheres to the one-China principle, opposes any form of “Taiwan independence”, supports China’s right to do everything necessary to defend China’s sovereignty and territorial integrity on the Taiwan question. A similar statement of the Foreign Ministry of Belarus said that Speaker Pelosi’s visit to Taiwan is an obdurate and irresponsible act of the US; that Belarus fully understands China’s concerns about the US’s interference in China’s internal affairs and the escalated tensions across the Taiwan Strait as a result of it; and that Belarus supports China’s measures to realize national reunification.

Not to be left behind the  DPRK Foreign Ministry said that the US’s interference in others’ internal affairs is contemptible, and constitutes deliberate political and military provocations and the root cause for the disruption to peace and security in the region; that the DPRK strongly condemns any foreign interference in the Taiwan question, which is China’s internal affair; that the DPRK fully supports the just position of the Chinese government to resolutely defend national sovereignty and territorial integrity; and that the US’s attempt to hold back China’s development and reunification will surely be resolutely thwarted. 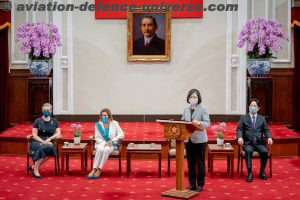 Iran’s Foreign Ministry Spokesperson said in a statement that the US is interfering in China’s internal affairs and undermining China’s sovereignty and territorial integrity; and that the visit is another example of the US’s policy of interfering in other countries’ internal affairs and the way the US conducts its foreign policy, which will only further undermine regional peace and stability.

The Syrian Foreign Ministry’s statement said that Syria condemns in the strongest language the US’s unprecedented ratcheted-up actions and provocation policy against China; that Pelosi’s visit to Taiwan is against international law; and that this irresponsible behaviour reflects the US’s “commitment” to disrupting peace and stability of the region and the world and serious harm to world peace and security.

The Palestinian Presidency released a statement calling for halting any actions that run contrary to the one-China principle while affirming China’s right to defend its sovereign, security and development interests.

Nicaragua’s President Daniel Ortega has issued a statement saying that when Speaker Pelosi flies on a military aircraft into the Taiwan region, it constitutes an invasion; and that such provocations will only make China stronger. Nicaragua’s Foreign Ministry also released a statement saying that Nicaragua supports China’s efforts to uphold sovereignty and territorial integrity and the government of Nicaragua urges the US to stop provocations.

The Foreign Minister of Trinidad and Tobago openly reaffirmed commitment to the one-China principle. The Foreign Ministry of the Laos issued a statement that said it reaffirms its support for the one-China principle, opposition to any intention aiming at creating a situation for “two Chinas” or “one China, one Taiwan” and support for China’s reunification by peaceful means. The royal family of Cambodia said on social media that there is only one China and Taiwan is a province of China.

The Spokesperson of the UN Secretary-General reiterated the UN’s commitment to the one-China principle, which was laid down in Resolution 2758 adopted by the 26th General Assembly in 1971.

The office of the leading Assistant Secretary-General of the League of Arab States (LAS) put out a statement on the official LAS website stressing that the one-China principle should be complied with, that it opposes actions that violate relevant UN resolutions and undermine regional peace and stability, and that the Arab League supports China’s sovereignty and territorial integrity and firmly upholds the one-China principle. Main political parties in Tunisia said on social media platforms that no country has the right to interfere in China’s internal affairs and Pelosi’s visit will only further damage the image of the US. It also believes that the US has made its fortune by plundering other countries. When it cannot win through fair competition, it would play disgraceful gambits like this. This is nothing surprising. 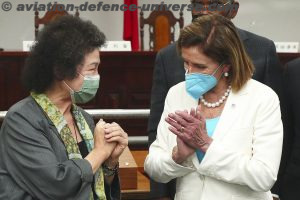 Brickbats on Pelosi’s visits are many but the most important fact is the emergence of a Russia-China led political alliance, even if not an officially announced one. China has well wishers , Russia is its closest friend , North Korea its long standing associate and Pakistan its all weather friend. All of them have their influences on the smaller nations which are not only dependent on China but also feel protected with its presence.

China’s strong reaction ofcourse was not diplomatic alone but very strongly military. The naval-air joint drills are being carried out in the northern, southwestern and southeastern waters and airspace off the Taiwan Island, long-range combat fire live shooting in the Taiwan Strait, and conventional missile firepower test launching in the waters off Eastern Taiwan Island. Through an official Ministry of National Defense statement it has pointed out that these military operations are the stern deterrence against the major escalation of the US’ negative moves on the Taiwan question, and also the grave warning on the separatist actions of the “Taiwan independence” forces.