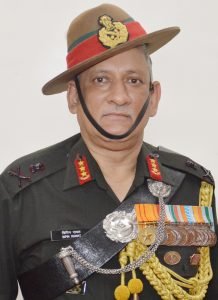 New Delhi.  31 Aug 2016. Lt Gen Bipin Rawat will take over as the VCOAS of the Indian Army on 01 September 2016. He was commissioned in the Fifth Battalion of the Eleven Gorkha Rifles in December 1978, from IMA, Dehradun, where he was awarded the ‘Sword of Honour’.

The General Officer has vast experience in high altitude warfare and counter insurgency operations.  He commanded an Infantry battalion, along the Line of Actual Control in the Eastern Sector; a Rashtriya Rifles Sector and an Infantry Division in the Kashmir Valley.

He has tenanted instructional appointments at Indian Military Academy, Dehradun and at Army War College, Mhow. Lt Gen Bipin Rawat has held important staff appointments at Directorate General of Military Operations and Military Secretary’s Branch at Army HQ.  He has also been Major General General Staff at HQ Eastern Command.  The officer commanded a Multinational Brigade, in a Chapter VII mission in the Democratic Republic of Congo (MONUC). Prior to taking over as the VCOAS, Lt Gen Bipin Rawat was the  of the GOC-in-C, Southern Command.

An alumni of Defence Services Staff College, Wellington, the Higher Command & National Defence College Courses, the General Officer,  during the span of over 35 years service in uniform, has been awarded for gallantry and distinguished service with the UYSM, AVSM, YSM, SM, VSM, COAS Commendation on two occasions and the Army Commander’s Commendation.  Whilst serving with the United Nations, he was twice awarded the Force Commander’s Commendation.

Lt Gen MMS Rai hung his uniform after an illustrious military career spanning four decades. Lt Gen MMS Rai was commissioned in the Corps of Engineers on 15 December 1976. Apart from the regimental service, the General Officer had tenanted various key staff, instructional and command appointments including that of GOC-in-C, Eastern Command.