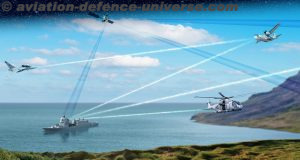 Manama, Bahrain. 9 November 2022. Leonardo is attending the tenth edition of the Bahrain International Airshow (Chalet A24), one of the most prestigious events in the civil and military aviation calendar.

Leonardo has a history of significant partnerships in Bahrain. Including the supply of two primary surveillance radars and three Mode-S secondary surveillance radars for Bahrain’s Civil Aviation organisation and Royal Bahraini Air Force. These radars enhance the safety and efficiency of national airspace management. This year, Leonardo concluded the delivery of the sixth and last naval unit “Al Taweelah”, which is part of an agreement for the upgrade of six Royal Bahrain Naval Force ships. Leonardo’s advanced technologies and expertise in the naval domain were an important focus during the recent visit of the Italian Navy’s “Thaon di Revel” Multipurpose Offshore Patrol in Bahrain.

From airborne surveillance radar and self-protection systems to multi-mission and training aircraft, Leonardo will showcase at BIAS 2022 a wide spectrum of latest generation technologies for complete situational awareness, and defence and multi-domain surveillance systems for the Arabian Gulf.

To meet the current needs, which involves constant airspace monitoring, Leonardo proposes the RAT 31DL three-dimensional surveillance radar. For the detection, classification, and tracking of small- and fast-moving aerial threats, such as mini and micro tactical uncrewed systems, the company is offering the multi-domain and dual use TMMR (Tactical Multi Mission Radar) sensor. The latest, completely digitized and in C-band, together with NERIO ULR electro-optical camera, is an effective solution for anti-drone and Counter Rocket, Artillery and Mortar (C-RAM) scenarios, which require mobility and rapid deployment, and for short-range air defence, surveillance and protection of platforms and vehicles, borders, territories and critical infrastructures.

Leonardo is able to support the missions of Air Forces worldwide via the provision of a variety of radar and self-protection systems. One leading product is the BriteCloud countermeasure, which has already entered service with the UK’s Royal Air Force. As a world-first technology, BriteCloud is undergoing evaluation for potential service with U.S. Armed Forces F-16 aircraft under the Foreign Comparative Testing (FCT) programme.

In addition to Leonardo’s wide offer of sensors for surveillance, the company is able to provide complete and multi-mission platforms. The C-27J Spartan, and more crucially the Next Generation variant, is suitable for tactical military transport, medical evacuation, patrol and ISR missions and fire-fighting operations.

Having sold over 2,000 training aircraft of various types to 40 countries, Leonardo showcase its latest solutions centred on the M-345 and M-346 aircraft, by which the company is able to cover the entire training syllabus. The M-345 jet trainer is a next-generation training aircraft that offers the training effectiveness typical of a jet aircraft at costs comparable to those of high-powered turboprop trainers. Within the light attack version, it is also capable of performing operational roles. The M-346, jet aircraft for pre-operational training, has operational characteristics similar to those of combat aircraft, such as the Eurofighter Typhoon and the F-35. Currently in service with the air forces including Italy, the Republic of Singapore, Poland and Qatar, it has now been chosen by Greece.

The M-346 is the main platform at the International Flight Training School (IFTS). IFTS is a result of the collaboration between Leonardo and the Italian Air Force, which already counts countries such as Qatar, Singapore, Germany and Japan among its customers. The IFTS makes use of the “Live Virtual Constructive capability” (LVC), capable of integrating the aircraft in flight, the ground simulators and virtual elements, so as to reproduce the most complex operational scenarios and enhance the effectiveness in training pilots of the new generation. The operational version of the aircraft M-346 Fighter Attack, already delivered to the 2 first international customer, retains all the training features of the trainer and through the integration of latest generation equipment and sensors, such as Leonardo’s Grifo radar specially optimized for this aircraft, becomes an effective light attack operational aircraft.

As a complete integrator of technologies for the management of all operational phases across decisionmaking levels, Leonardo has leveraged the experience gained in the development of compact and highenergy airborne targeting lasers to design the Type 163 laser target designator, a combat-proven technology for ground forces which meets the requirements of Joint Terminal Attack Controller (JTAC) missions. Over 1000 units of the Type 163 Laser target designator have been delivered to 29 Nations.

Taking into consideration the latest helicopter models including the AW139, AW169, AW189, NH90 among others, over 300 Leonardo helicopters are flying in the region. The AW139 has proven extremely successful in the Middle East with over 150 units in service across the region for the widest scope of missions including corporate transport, emergency medical service, search and rescue, law enforcement, offshore transport, and government duties.