On arrival at the Naval Jetty, the Defence Minister was received by Admiral Sunil Lanba, the Chief of the Naval Staff. She was presented with a Guard of Honour and was introduced to the dignitaries’ present prior commencement of commissioning ceremony.

Welcoming the gathering, Admiral Sunil Lanba stated that this commissioning marks yet another milestone in our journey of indigenous warship building. The Indian Navy is deeply committed to the principle of indigenisation and the Government’s thrust on ‘Make in India’. Commissioning of four ships in the last year, all built in Indian shipyards, is a testimony of our resolve. Our commitment to indigenisation also assumes special significance as we have steadily broadened our indigenisation efforts beyond ship building. We have achieved considerable success with indigenous sonars such as Abhay and HUMSA-NG as well as weapons such as Varunastra and BrahMos. These achievements are a result of the Indian Navy’s proactive and integrated approach to achieve self-reliance said the Admiral.

During her address post commissioning of INS Kiltan, Nirmala Sitharaman congratulated the Indian Navy, M/s. GRSE, other Indian PSUs and a host of small and medium scale industries, which have contributed towards building this fine ship. She emphasised that the Navy’s relentless pursuit of self-reliance through indigenisation is highly appreciable and this has helped the Indian Navy to seamlessly transform from a Buyer’s to a Builder’s Navy. She highlighted that the addition of INS Kiltan to the naval fleet is a reaffirmation of this transformation. She further exhorted that we need to benchmark our shipbuilding practices to international best practices and produce quality ships in a shorter time frame and at competitive costs. She further stated that the Government fully appreciates the nation’s defence requirements and requisite finances for the Armed Forces and Defence industry would be made available for the modernisation and development plans of the Navy. The Raksha Mantri later unveiled the Commissioning Plaque and dedicated the ship to the nation.

Regarded as a very prestigious acquisition, INS Kiltan is one of the most potent warships to have been constructed in India. The ship’s keel of was laid on 10 August 2010 and launched on 26 March 2013. Her maiden sea trials commenced on 06 May 2017 and finally was handed over to the Indian Navy by GRSE on 14 October 2017. The sleek and magnificent ship is propelled by ‘Combination of Diesel and Diesel (CODAD)’ propulsion system of four diesel engines to achieve speeds in excess of 25 knots and has an endurance of around 3,500 Nautical Miles.

The ship has enhanced stealth features resulting in a reduced Radar Cross Section (RCS) achieved by X-form of hull and superstructure along with optimally sloped surfaces. The very low under water acoustic signature makes it a ‘silent killer on the prowl’. This has been achieved by using advanced techniques for propeller design and mountings of main machinery. The ship’s advanced stealth features make her less susceptible to detection by the enemy and help in effective employment of soft kill measure like the Chaff.

More than 80 % of the ship is indigenous with state of the art equipment & systems to fight in Nuclear, Biological and Chemical (NBC) warfare conditions. Also, P-28 weapons and sensors suite is predominantly indigenous and showcases the nation’s growing capability in this niche area. INS Kiltan is the first major warship with superstructure entirely of composite material. 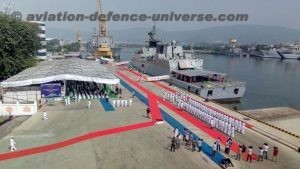 The ship gets her name from old INS Kiltan (P79), a Petya class ASW ship that served the nation for 18 years before being decommissioned in June 1987. Named after the coral island belonging to the Lakshadweep group of islands in India, the ship has a total complement of 15 officers and 180 sailors. The sleek and magnificent ship spans 109 meters in length, 14 meters in breadth with a displacement of 3,300 tonnes and can rightfully be regarded as one of the most potent Anti Submarine Warships to have been constructed in India. 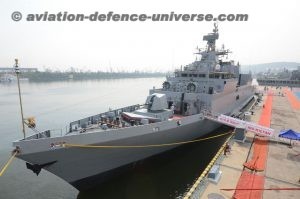