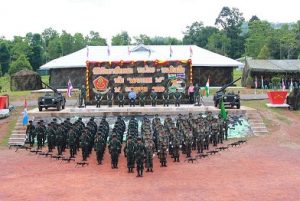 Krabi, Thailand. 16 July 2016. 90 soldiers from Indian Army and an equal number from Royal Thailand Army are taking part in the two week long joint training exercise.Exercise ‘MAITREE’ is to train contingents of both the armies on conduct of  counter terrorist operations in an urban environment.
The exercise is designed to enhance mutual cooperation and interoperability between the two armies and improve understanding of each other’s tactical drills and actions in counter terrorism operations. The participants of the two Armies will also familiarise themselves with each other’s armed forces’ structure as well as the geography & culture of both countries.
Exercise MAITREE will go a long way in further cementing the bilateral relationship between the two nations & giving impetus to the ongoing defence cooperation.
Share this on WhatsApp