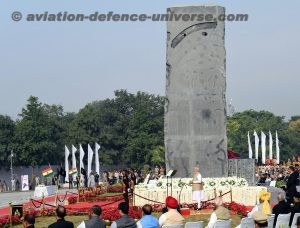 New Delhi. 21 October 2018. The National Police Memorial (NPM) was dedicated to the nation by the Prime Minister Narendra Modi in recognition of the supreme sacrifice made by police personnel since independence. The memorial erected on 6.12 acres of land in Chanakyapuri, at the northern end of Shanti Path represents all State/UT Police Forces and Central Police Organizations of the country.

Speaking on the occasion, Prime Minister saluted the courage and sacrifice of police personnel who laid down their lives for the service of the nation. He recalled the sacrifices of the brave police personnel who fought valiantly at Hot Springs, Ladakh and paid respects to their family and loved ones. He honoured the three surviving members of Hot Springs incident. He also inaugurated the Museum of National Police memorial and signed the visitor’s book.

October 21 is observed as the Police Commemoration Day every year in memory of the policemen killed at Hot Springs in Ladakh by Chinese troops on this date in 1959. Since 1947, 34,844 police personnel have been martyred, with 424 losing their lives this year. Many of these brave lives were lost in the fight against terrorism (referred to as militancy and insurgency in some theatres) in various geographical regions such as Kashmir, Punjab, Assam, Nagaland, Manipur, Mizoram and LWE-affected regions of the country. Further, a large number of police lives were lost in prevention of crime and in maintenance of law and order.

Expressing happiness in dedicating the National Police Memorial, Prime Minister said that the Central Sculpture of the memorial represents capability, courage and service orientation of the police forces. He added that every object associated with the National Police Memorial would inspire the citizens and educate them about the bravery of police and paramilitary personnel. He added that the peace, security and prosperity presently enjoyed by the nation had been possible due to the sacrifices and consistent efforts of police, paramilitary and armed forces.

The central sculpture of the NPM is a 30 feet monolith made of a single piece of granite, weighing 238 tonnes. Its weight and colour symbolise the gravitas and solemnity of the supreme sacrifice. A 60 foot long river at the base of the sculpture reflects the continuous self-service of the policeman and woman, to maintain peace and public order. The Wall of Valour has the names of all 34,844 martyrs engraved on granite.

An award in the name of Netaji Subhas Chandra Bose, to honour those involved in disaster response operations was also announced by him. The award would be announced every year, recognizing the bravery and courage displayed in saving lives of people, in the wake of a disaster.