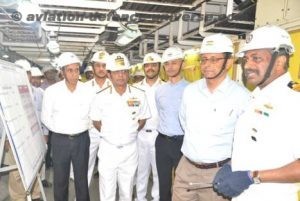 The first ship of the class, Vikrant, is the IAC which displaces about 40,000 metric tons (39,000 long tons), is 262 metres (860 ft) long and has a tailored air group of up to thirty aircraft. The IAC-I features a STOBAR (Short Take-Off But Arrested Recovery) configuration with a ski-jump. The deck is designed to enable aircraft such as the MiG-29K to operate from the carrier. It will deploy up to 30 fixed-wing aircraft,primarily the Mikoyan MiG-29K, besides carrying 10 Kamov Ka-31 or Westland Sea King helicopters. The Ka-31 will fulfill the airborne early warning(AEW) role and the Sea King will provide anti-submarine warfare (ASW) capability.

The carrier is powered by four General Electric LM2500 gas turbines on two shafts, generating over 80MW of power. The gearboxes for the carriers were designed and supplied by Elecon Engineering.

The ship was launched in Aug 2013 and presently, the main propulsion plant, power generation equipment, deck machinery and auxiliary equipment have been installed and integrated on board. Outfitting of various aviation equipment, navigation and communication equipment, weapons and sensors are progressing. In-house trials of ship’s systems by the Carrier Acceptance & Trials Team have already commenced and the sea trials are expected to commence by early 2020.

Amongst the first construction problems experienced was the lack of supply of carrier-grade steel due to the inability of Russia to supply the AB/A grade steel. Finally, the Defence Metallurgical Research Laboratory (DMRL) worked with the Steel Authority of India Limited (SAIL) to create suitable production facilities for the steel in India. The SAIL Steel Plants of the Steel at Bhilai, Rourkela, Durgapur and Bokaro manufactured 26,000 tonnes of three special steels being used for the hull, flight deck and floor compartments of the carrier.

The keel for Vikrant was laid by Defence Minister A.K. Antony at the Cochin Shipyard on 28 February 2009.The ship uses modular construction, with 874 blocks joined together for the hull. By the time the keel was laid, 423 blocks weighing over 8,000 tonnes had been completed. The construction plan called for the carrier to be launched in 2010, when it would displace some 20,000 tonnes, as a larger displacement could not be accommodated in the building bay. It was planned that after about a year’s development in the refit dock, the carrier would be launched when all the major components, including underwater systems, would be in place. Outfitting would then be carried out after launch. As per the Cabinet Committee on Security (CCS), sea trials were initially planned to commence in 2013, with the ship to be commissioned in 2014.

In March 2011, it was reported that the project had been affected by the delay in delivery of the huge main gearboxes for the carrier. The supplier, Elecon Engineering, had to work around a number of technical complexities due to the length of the propulsion shafts. Other issues resulting in delays included an accident with a diesel generator and an issue with its alignment. In August 2011, the defence ministry reported to the Lok Sabha that 75% of the construction work for the hull of the lead carrier had been completed and the carrier would be first launched in December 2011, following which further works would be completed until commissioning.On 29 December 2011, the completed hull of the carrier was first floated out of its dry dock at CSL, with its displacement at over 14,000 tonnes.Interior works and fittings on the hull would be carried out until the second half of 2012, when it would again be dry-docked for integration with its propulsion and power generation systems.

Work has begun for next stage which includes installation of the integrated propulsion system. Italian defence company Avio is installing the integrated platform management system (IPMS).

In July 2016, the Comptroller & Auditor General (CAG) published a 2014 project plan, supplied by the Cochin Shipyard, that shows an expected completion date in 2023, though the Navy hopes to partially commission the ship before this date.

Preparations for building the lead vessel of the class, INS Vikrant, started in 2008, and the keel was laid in February 2009. The carrier was floated out of its dry dock on 29 December 2011 and launched on 12 August 2013. The scale and complexity of the project caused problems which delayed the commencement and timeline of construction for the carrier. Technical difficulties, the cost of refitting the Russian-built carrier INS Vikramaditya, and billions in cost overruns have delayed plans for the first of the vessels to enter service, with completion now planned for 2023.

In 1989 India announced a plan to replace its ageing British-built aircraft carriers, Vikrant and Viraat, with two new 28,000 ton Air Defence Ships (ADS) that would operate the BAe Sea Harrier aircraft. The first vessel was to replace Vikrant, which was set to decommission in early 1997. Construction of the ADS was to start at the Cochin Shipyard (CSL) in 1993 after the Indian Naval Design Organisation had translated this design study into a production model. Following the 1991 economic crisis, the plans for construction of the vessels were put on hold indefinitely.

In 1999, then Defence Minister George Fernandes revived the project and sanctioned the construction of the Project 71 ADS. By that time, given the ageing Sea Harrier fleet, the letter of intent called for a carrier that would carry more modern jet fighters. In 2001, CSL released a graphic illustration showing the 32,000-ton STOBAR (Short Take-Off But Arrested Recovery) design with a pronounced ski jump. The aircraft carrier project finally received formal government approval in January 2003. By then, design updates called for a 37,500 ton carrier to operate the MiG-29K. India opted for a three-carrier fleet consisting of one carrier battle group stationed on each seaboard, and a third carrier held in reserve, in order to continuously protect both its flanks, to protect economic interests and mercantile traffic, and to provide humanitarian platforms in times of disasters, since a carrier can provide a self-generating supply of fresh water, medical assistance or engineering expertise to populations in need for assistance.

In August 2006, then Chief of the Naval Staff, Admiral Arun Prakash stated that the designation for the vessel had been changed from Air Defence Ship (ADS) to Indigenous Aircraft Carrier (IAC). The euphemistic ADS had been adopted in planning stages to ward off concerns about a naval build-up.

The aircraft aboard the IAC-I, INS Vikrant was initially planned to be Mikoyan MiG-29K, Kamov Ka-31, Westland Sea King and HAL Dhruv. With the Indian Navy floating a RFP for 57 aircraft last year, the fleet type still seems to be a little mystery which will get solved only after the the bids open and L1 decided.

During the on board visit, the Defence Secretary was given a first-hand briefing on the progress of IAC construction by Commodore Cyril Thomas, the Warship Production Superintendent. Madhu S Nair, CMD,CSL, highlighted the shipyard’s focus on outfitting and trial activities as the project enters its final phase, and re-iterated the CSL’s commitment to meet the timelines for delivery of the ship.

The ship was launched by Elizabeth Antony, wife of Defence Minister A K Antony on 12 August 2013. INS Vikrant  had it’s undocking in June 2015. Sea trials are expected to begin in 2019, with commissioning expected in 2020. But now the wait seems to have got a little longer.