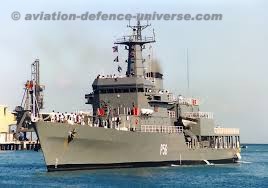 Executive Branch trainee officers, after completing ab-initio training at the Indian Naval Academy, including the successful completion of B Tech degree course, join the First Training Squadron for intensive Practical Sea Training of 24 weeks designed to enable them get their ‘Sea Legs’. The Sea Trainees are taught seamanship, basic navigation, ship handling, boat work, engineering aspects besides exposure to the rigours of life at sea. The curriculum also includes sail training onboard the Sail Training Ship, where the trainees are exposed to the elements and get to grips with the art of sailing and rope work. On successful completion of this phase, the trainees are appointed to various ships of the Indian Navy and Coast Guard for the Afloat Training Phase and Seamanship Board. At the First Training Squadron, the IN also trains officers from friendly foreign countries.

The Indian Navy has imparted training to international trainees for more than four decades, and approximately 13,500 personnel from over 40 countries have been trained. Presently four officers from Malaysia are undergoing various Ab-initio to advanced courses at SNC. The Command has gained the reputation of being the finest training destination by maintaining a focussed approach to provide high quality training and by constant adaptation to evolving tactics and technologies.

The Training Squadron is helmed by Captain DJ Revar, Senior Officer First Training Squadron, who is also Commanding Officer INS Tir. He has under him, a team of highly motivated officers and sailors to assist him in conduct of the sea training.