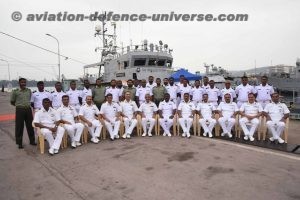 Visakhapatnam. 15 November 2018. Maldivian Coast Guard Ship (MCGS) Huravee successfully completed her refit at Naval Dockyard Visakhapatnam and the ship was formally handed over to Major Mohamed Jamshad, Commanding Officer MCGS Huravee in a ceremony organised to commemorate the occasion . The chief guest for the function, Rear Admiral Amit Bose, Admiral Superintendent Naval Dockyard thereafter addressed the gathering wherein he ensured continued support of the Indian Navy to the Maldivian Coast Guard.  The Commanding Officer also took this opportunity to thank the Indian Navy for the successful completion of the refit. The event concluded by customary crest exchange between the ship and the chief guest.

The four-month long refit to MCGS Huravee is an initiative by the Indian Navy undertaken in furtherance of the Indian Navy’s diplomatic outreach to friendly foreign navies in the Indian Ocean Region.  The ship had arrived at Visakhapatnam on 12 Jul 18 and successfully completed her refit on 14 Nov 18. During the refit, major repairs were undertaken on the ship’s hull, main propulsion and auxiliaries. In addition number of systems and equipment were upgraded for better performance and reliability. All equipment were put through extensive harbour and sea trials so as to achieve full combat capability of the ship and ensure her continuous availability for operations to the Maldives Coast Guard for next operational cycle.

MCGS Huravee was originally commissioned as INS Tillanchang, a Trinkat class patrol vessel built by Garden Reach Shipbuilders and Engineers, Kolkatta in Mar 2001 and was subsequently gifted to Maldives by the Govt of India in Apr 2006 to strengthen the strategic partnership between the two nations and work together to ensure the maritime safety of the Indian Ocean Region.  The Indian Government through the Navy has undertaken such diplomatic courtesies previously when it undertook the refit of the ship in 2015. 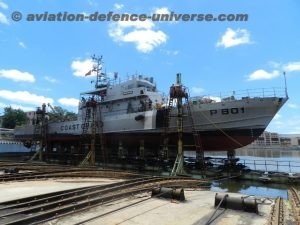 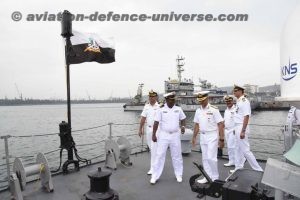