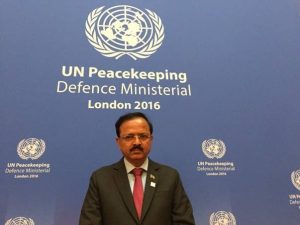 08-September, 2016 Minister of State for Defence, Dr.Subhash Bhamre has reaffirmed India’s commitment to the United Nations Peacekeeping Operations and confirmed that India will provide troops for United Nations peacekeeping, as pledged by the Prime Minister, Shri Narendra Modi in New York last year.

Speaking at the Defence Ministers’ meeting in London today, the Minister recalled India’s consistent and substantive response over the past seven decades of United Nations peacekeeping operations. More than 2,30,000 Indian troops have participated in 50 of the 71 United Nations peacekeeping operations mandated by the United Nations Security Council so far. India has also aided in capacity building of many countries, training 114 prospective peacekeepers from 35 countries this year itself; with a special course each for African countries and for female peacekeepers.

Dr. Bhamre drew attention to the challenges being faced by United Nations peacekeeping, with armed groups and non-state actors playing ‘spoilers’ to peace efforts. United Nations Peacekeeping Missions are no longer benign and humanitarian tasks are a major facet of current United Nations missions. The Minister exhorted the United Nations to work in sync with host Governments, otherwise it could lead to greater turbulence, he said. Dr. Bhamre also voiced the need to bring about qualitative improvements in the performance of United Nations contingents, United Nations staff and mission leadership.

The Minister reiterated the issues raised by the Prime Minister, Shri Narendra Modi last year during the Leaders’ Summit on Peacekeeping, including the necessity to involve Troop Contributing Nations involved in mandate formulation, representation in key leadership positions in mission areas and above all; the requirement of a more representative Security Council.

This London Ministerial is a follow-up to the hugely successful Leaders’ Summit last year at New York; with an agenda to follow up on the peacekeeping commitments made by countries during the Summit.