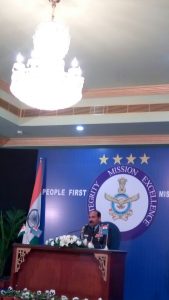 New Delhi. 28 December 2016. “My worst moment of being the chief came when I heard about the An32 missing with 29 personnel. We searched a lot, undertook 300 sorties, over 1000 flying hours. We had about 30 targets which look like the An32 debris. We have underwater assets which can search till the depth of 3.5km from the surface. From 30, there are now just 10 targets which remain to be verified. The underwater equipment to search could not do its job because there was a technical issue. We have approached the government to contract agencies from abroad who can search. Most of the Soviet era planes like the AN32 lack under water locator beacons. We have taken up with the government a case to procure such beacons. Within a month or two, a contract signed to arm all planes with such beacons. I feel, the An32 is not the best plane for this route. You can call it a mistake of not fitting these planes with the beacons,” said IAF chief Air Chief Marshal Arup Raha addressing the media in a customary press conference pre – retirement.

Raha speaking on the need of more fighters to strengthen the force said, “the teeth of any air force is in its fighter planes. The government has allowed us 42 squadrons. As of now, we have a large number of Sukhoi 30 (10 squadrons inducted and three more will be done soon). We are doing a mid life upgrade and we foresee them to be around for the next 30 years. The Light Combat Aircraft (LCA) TEJAS is a good, fourth generation plus aircraft. The Rafale is an excellent aircraft which will prove its worth in any scenario. We have just signed up for 36 planes. In the next 5-10 years time, we need more. One more line of aircraft production is required in India under the Make In India program. Need about 200 fighters over next 5-10 years. We have enough heavy fighters (like Sukhoi) but we need more in the medium segment.”

Raha also said that the process for procuring the Airbus C295 transport aircraft, to be manufactured by a joint venture of the Tatas and the European aerospace major Airbus, should not take very long. He called it a landmark decision to manufacture this transport aircraft in India involving the private sector.

He felt that the IAF’s Russian-origin Ilyushin-78 tanker fleet was plagued by maintenance problems and more mid-air refuellers were a strategic requirement. “Sadly, there have been some problem areas in the acquisition. A new tender will be out soon,” the chief said.

Another thorn which pricked during his tenure he felt was the Pathankot terror attack which were a major setback. “We learnt our lessons. Today, I can say that we are very well prepared. We have beefed up securities in all the airforce stations and will make sure that such incidences do not occur in the future. Much has been discussed and we are implementing the lessons learnt. We are now well prepared to tackle terrorist attacks. A lot has been done in training, orientation, weapons are being improved, field-craft has been improved. We are training a large number of manpower. Government has given us the authority to have 27 GARUD commando flights (each with 45 men) and 23 more have been sanctioned, taking it to total of 50 GARUD commando flights, ” he said.

Responding to China’s reaction to the Agni V missile test a few days back, the IAF chief stated that India is legitimately developing its capability indigenously and he does not think anyone should complain about it. “But we also know we have been drawn into conflicts several times in the past. So going by historical experience, we have to build our capability. Capability to deter. How do we deter an adversary who is strong? We have to build up capability in order to strike deep into adversary’s heartland, take on targets effectively which will hurt the adversary,” he said.
.
On the One Rank One Pension imbroglio, the IAF chief said, “ it was an unprecedented situation which affected the esteem of the armed forces. Whatever has been awarded by government to my mind is reasonable I have always told my people to accept this. It has been given after 40 years of struggle and it is substantially good.”

Answering a question on the supersession of two generals in the promotion of General Bipin Rawat appointed the Army Chief, he said, “We have had selections based on merit or the consideration of the government. Seniority has been overruled in the past as well. I think we should go along with the decision, otherwise it will weaken the person who is going to be the next chief. We have to strengthen Rawat’s hand. He is a good soldier, a good officer and so is Bakshi. But, a decision has been made,” he said.

On demonitisation he felt that it is a huge initiative and we have along with the government realized the hardship caused to people. We have pitched in to carry cash from the mints. “Our C130 and C17 planes have been deployed in ferrying cash across the country. We have flown 35 sorties ad carried 620 tones of cash,” he added.

On enhancing operational efficiency Raha said, “We have flown a lot more by the night. Average flying by night earlier was 17-20 per cent. Now it is about 30 per cent. We are exercising more. Serviceability of the planes was not very good. Many cases, contracts for spares have been signed and flagged to help the situation improve. Now serviceability has gone up by 5-7 per cent. Despite retiring older planes, we are achieving much more flying hours than in the past. By March-April next year, we will operationalise the second C130 squadron at Airforce Station Arjun Singh, Panagarh.

The Air Chief Marshal, who is set to retire on December 31, in the backdrop of corruption allegations against former IAF chief S P Tyagi in the VVIP chopper scam, said multiple agencies are involved in the procurement process and no one can pin the blame on one particular organisation or service. “A former air force chief is like a family member, extended family member. If anybody in my family goes through a rough patch, I think we should stand by that person. And if the charges are proved, then we have no sympathy for him. If these corruption charges are proved, it is bad for the armed forces, or whoever is involved. It is not just the armed forces who are involved in the procurement,” he said.

In his last tete-e-tete with the media the Air Chief did bring out a lot of relevant points and actions to be taken, but a little too late. It will now be upto his successor to pick up the reigns and follow up.