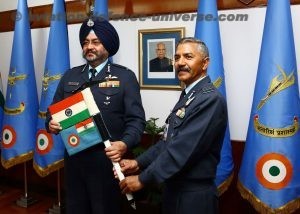 The team, now has returned successfully after proudly flying the Tricolour and IAF flag on the highest peak of Antarctica on 25 Dec 2017 at 1845 hrs and thus created yet another glorious moment for the IAF. On 11 Jan 2018, in a ceremonial function, Air Chief Marshal BS Dhanoa , CAS, flagged-in the team by receiving the Ice Axe and the Tricolour from the Team Leader Gp Capt RC Tripathi.

The Chief of the Air Staff, Air Chief Marshal B.S. Dhanoa and other senior Air Force Officers with the mountaineering expedition team.

The CAS felicitated and complimented the team for braving the challenge and fighting the elements encountered during the expeditions. He also congratulated the team for this historic accomplishment of flying the Tricolour on the highest mountains of all the continents. With this, Indian Air Force becomes the first organisation in India to have completed ‘Seven Summits’, indeed a rare feat to achieve.

Indian Air Force has always been at the forefront in its pursuit to endure challenging ventures. ‘IAF Mission Seven Summits’ has been one of such unique trysts by IAF, undertaken with an aim to hoist the National Tricolour on the highest mountains of all seven continents. After creating history in 2005, by summiting Mt Everest, IAF launched an unprecedented series of mountaineering expeditions ‘Mission Seven Summits’ in 2008.