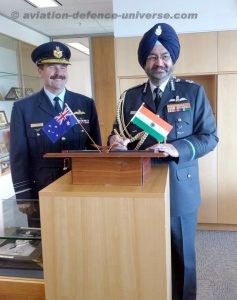 New Delhi. 20 September 2017. Air Chief Marshal Birender Singh Dhanoa, Chief of the Air Staff is on an official visit to Australia from 19-22 Sep 17. The visit is intended to further strengthen the existing defence cooperation between the Air Forces of the two countries.

During his stay, he is scheduled to hold talks with top brass of the Royal Australian Air Force on security challenges being faced by the two forces in the current geopolitical scenario and explore ways to deepen defence cooperation. The main focus of the visit is on improving bilateral relations, promoting defence ties and exploring further area of defence cooperation between the two Air Forces.

During the visit, the CAS would visit the Headquarters of Royal Australian Air Force and operational air bases.

Amidst many commonalities is the fact that both India and Australia have each used the Globemaster to support humanitarian assistance and disaster relief operations. India has 10 and Australia 8 of them.

Australia and India are committed to working together to enhance maritime cooperation, with a bilateral naval exercise AUSINDEX. Practical cooperation between Australia and India is evident through our joint participation in a range of activities. Australia participated in the Indian-hosted Exercise MILAN , which included the opportunity to cooperate with India and other regional Navies. In June 2015, two Indian Navy ships Satpura and Kamorta visited Fremantle in Western Australia, coinciding with a visit by the Indian Navy’s Eastern Naval Commander. In February 2016, Australia’s Chief of Navy, a Royal Australian Navy ship and a detachment of the RAN Band  participated in the Indian Navy’s International Fleet Review.

Key platforms for strategic dialogue include the annual Defence Policy Talks and the annual 1.5 Track Defence Strategic Dialogue, with the Defence Policy Talks . Senior visits also occur on a regular basis. In September 2015 the then Australian Minister of Defence visited India, resulting in agreement to deepen our defence cooperation ties, including through establishing a Joint Working Group on Defence Research and Materiel Cooperation. Service chiefs from both countries regularly engage with their counterparts, exchange security perspectives, and gain an understanding of each other’s structures and capabilities through visits, with the Indian Chief of Naval Staff recently visiting Australia. The services also engage regularly through Navy, Army and Air Force Staff Talks.