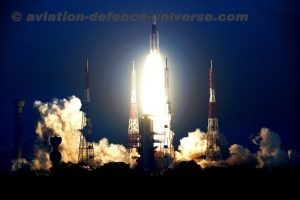 GSLV MkIII-D2 lifted off from the Second Launch Pad of SDSC SHAR at 17:08 hours (IST), carrying the 3423-kg GSAT-29 satellite. About 17 minutes later, the vehicle injected the satellite into the Geosynchronous Transfer Orbit (GTO) as planned.

After injection, ISRO’s Master Control Facility at Hassan has assumed the control of the satellite. In the coming days, three orbit raising manoeuvers will be executed to position the satellite in the Geostationary Orbit at its designated location.

GSAT-29 is a multiband, multi-beam communication satellite, intended to serve as test bed for several new and critical technologies. Its Ku-band and Ka-band payloads are configured to cater to the communication requirements of users including those from remote areas especially from Jammu & Kashmir and North-Eastern regions of India.

After the successful launch, ISRO Chairman Dr K Sivan said: “India has achieved significant milestone with our heaviest launcher lifting off the heaviest satellite from the Indian soil. The launch vehicle has precisely placed the satellite in its intended orbit. I congratulate entire ISRO team for this achievement.”

Declaring GSLV MKIII operational, Dr Sivan announced that Chandrayaan-2 and Gaganyaan missions will be launched by this heavy-lifter.

Jayakumar B, Mission Director, GSLV Mark III said it is the guidance of the Mentors at ISRO that helped the team to march ahead while facing obstacles. “The industry partners too played a key role in this mission,” he said.

K Pankaj Damodar, Project Director, GSAT-29 said the launch will help to bridge the digital divide. He also said several next generation payload technologies will be demonstrated with this mission soon.

The success of GSLV MkIII-D2 marks an important milestone in Indian space programme towards achieving self-reliance in launching heavier satellites. The success of this flight also signifies the completion of the experimental phase of GSLV Mark III.

The first successful mission of GSLV Mark III was an experimental suborbital flight in 2014. Subsequently, GSLV Mark III-D1 launched GSAT-19, a high throughput communication satellite, with a lift-off mass of 3150 kg, into GTO on June 5, 2017.