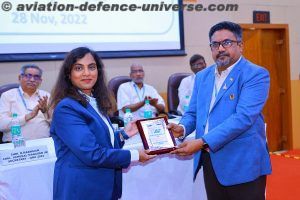 Hyderabad, December 02, 2022. SKM Technologies, the industry partner of DRDO involved in manufacturing of Aerospace and Defence components which recently opened its state of the art 70,000 sq ft new facility at Aerospace Park in Adibatla gets recognition as best supplier from Aircrafts Division of Hindustan Aeronautics Limited(HAL), an aerospace and defense company, owned by the government of India

SKM Technologies Pvt. Ltd, is a leading world class manufacturer of high precision components and assemblies for some of the reputed companies in India and abroad such as Rafael, Pratt & Whitney, Dedienne Aerospace, Dassault Aviation, Magellan Aerospace Corporation, Nuclear Fuel Complex, Hindustan Aeronautics Ltd, DRDO, BDL and among many others.

The recognition is just bestowed on the company during a Valedictory function of Quality Month at HAL in Bangalore.  “An assessment was carried out by a sub-committee for all the suppliers with respect to Quality Parameters.  It is an initiative towards encouraging the suppliers for improving Quality of the products” stated R. Madhaian, Additional General Manager, Quality Control in a communication to SKM Technologies Pvt. Ltd.

Sarita Rathibandla, MD of the company, who is probably only woman entrepreneur in Aerospace Engineering, Defence and Missile Sectors manufacturing high precision components and assemblies in the city received the honour on behalf of 150 employees from Mr. S. Manicka Vasagam, GM of HAL at a special function held just in Bangalore.

A Women Entrepreneur in Aerospace Engineering Sector to be watched, Sarita though alien to the industry is making her own mark.  The R & D facility she built in the city was inaugurated in May this year by Dr G Satheesh Reddy, Secretary, Department of Defence R&D and Chairman, DRDO.

The facility situated in three acres of land was set up at an investment of Rs 55 Crore. It eyes a turnover of Rs 30 crore this year. And more turnover is likely to be expected with additional investments pumped in.

Giving her remarks on the honour the company received, she Sarita said “it is a reward for excellence.  We leave no stone unturned to ensure quality products”.

We have partnered with BDL for indigenous missiles like Akash, QRSAM and many others which are under R & D. We are also working with HAL in various locations. We have added many high technology, high precision machinery at this plant. Currently we have 5-Axis, 4-Axis, 3-Axis VMCs, HMC, VTL,  turning machining centres of various sizes as large as 5 metres bed size that can accommodate jobs upto 8 meters and we have a Carl Zeiss CMM that can measure an accuracy of 0.7 microns. And we plan to expand as per the demand, Sarita Rathibandla shared.

Masters in Industrial Engineering, Sarita has 20 years of working experience.  She returned from the US to pursue her dream to head her father’s company, Dynamic Tools Pvt Ltd, has acquired SKM Technologies Pvt Ltd in 2020 and it is now a leading company in Aerospace and Defence sector.   We at SKM Technologies strongly believe in making a contribution for a self-reliant India in the world of Research and Defence Technologies, she says.