HAL & Safran together form a MRO for Safran engines in India 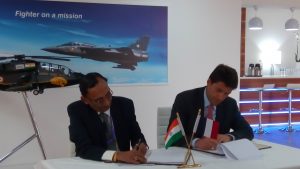 Farnborough. 11 July 2016. Amidst internationally raining announcements on the first day of the Farnborough Airshow, India was not to be left behind. Hindustan Aeronautics Limited(HAL) signed a MOU with French engine maker Safran, to form a joint venture company for maintenance , repair and overhaul of the 500 plus strong fleet of Safran engines used by the Indian defence and para-military force.

This MRO is slated to be located in Goa. Another feather in Defence Minister’s overflowing cap, of trying to make his home state an aviation and defence hub.

The setting up of the facility will be done in two phases. The first will be the maintenance  phase and the second the repair and overhaul phase, informed DK Venkatesh, Diector(Engineering R&D), who signed the contract for HAL.

The engines which will be looked after are HAL-Turbomeca’s jointly manufactured Shakti which is Ardiden 1H1 and Turbomeca’s TM 333 2B2. The former are on HAL Dhruv and HAL Light Combat Helicopter. The latter are on HAL’s  Dhruv early deliveries,  Cheetah and Chetak.

The HAL/Turbomeca Shakti (called the Ardiden 1H by Turbomeca) is a turboshaft helicopter engine jointly developed by India and France. The development of the Shakti/Ardiden 1H project was initiated in 1999 by the two companies to power the HAL Dhruv helicopter. However, several factors including the US embargo following India’s 1998 nuclear tests forced the project to run behind schedule. Hence, early models of the Dhruv used the less powerful Turbomeca TM 333-2B2 engine as a contingency. The first test flight of the Dhruv with the new Shakti engine took place on 16 August 2007. By late 2007, HAL started fitting the Shakti engines for Dhruvs produced from then. 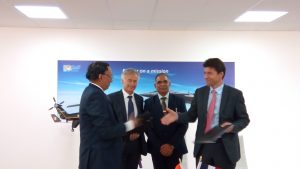 The Turbomeca TM 333 is a turboshaft engine designed for 5- to 6-ton-class helicopters. The TM 333 found its first commercial application on the HAL Dhruv. For multi-engine applications presently, HAL Dhruv employs two TM 333 2B2 engines each developing 825 kW at takeoff, with growth potential to 900 kW for subsequent versions. The TM 333 2B2 is the initial production engine used on the Dhruv. Approximately 250 engines are installed on Dhruv and further production has been stopped as it is replaced by Shakti engine which is joint development by HAL & Turbomeca. 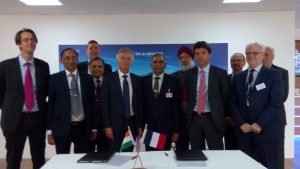 Bruno Even, CEO Safran Helicopter Engines informed that it will be a fifty-fifty percent JV. At the end of Phase I there will be fifty employees and by the end of Phase II of setting up, there should be somewhere between two to three hundred , he informed.

The facility will be up and about in three and four years. The JV has identified an existing infrastructure which will be modified to suit their requirements. The official ceremony at Goa is expected to be held somewhere in the fall of 2016.