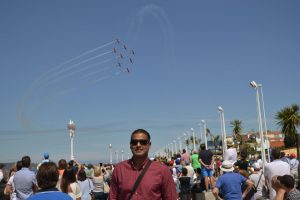 Gijon, Spain. 26 July 2017. FESTIVAL Aero de Gijon is more than just an eye-catching air show in the wonderful city of Gijon, in Spain.

It may not match the prestigious billion-dollar international aerial shows hosted by the super-powers but in simple humble ways, it makes the soft headlines.

The twelve edition of the Festival Aero de Gijón was no exception, the event has been receiving strong response year on year.

It was a rousing day for the Spaniards, equipped with beach chairs enjoying the occasional breeze and the scorching sun remarked “Qué calor” (It’s so hot) as they fanned. With the clear blue skies at the Gijón beach, Northern Spain, they were also greeted with a galore of maneuvers from the classics, T-6 Texan and Bücker to fighter jets, F-16 and EF-18 totaled to a staggering number of 34. 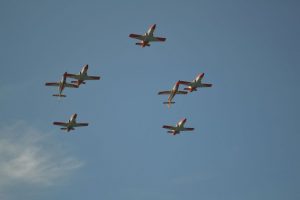 What a nice cast of multi-national military and civilian aeroplane wizards: The Swiss Air Force, Super Puma made its way to el Cerro de Santa Catalina, Gijón. The Super Puma was in open for photo clicking that attracted many onlookers. And became a busy strategic spot to catch the glimpses of other aircrafts in practice prior to the event.

The event kick started with skydiving from an altitude of 7,000ft and ten aircrafts flying simultaneously for the first time, in the history of this festival. The Swiss, Belgian and the Spanish Air Force pulled some of the breath-taking stunning performance collectively. But the A400M did not depart Zaragoza citing technical problems. 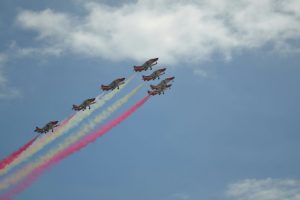 Some of the eye-catching talking points were the dramatic heroic-like flying.With velocity as being one of the key elements, Captain Pablo Carretero, Wing 12, Spanish Air Force behind the McDonnell Douglas EF-18 (Hornet) and Senior Captain Tom De Moortel F-16, solo display team of Belgium Air Force, carried a number of demonstrations with quick verticals and maneuvers with smoke trails.

Most notably, the Spaniards waited in anticipation of their champion of aerobatics, Jorge Macias who flew the German Extra EA-200. What a rip-roaring show: He communicated with the announcer on the ground for public requests on the most desired acrobat. And he excellently performed the same that came with round of applause. To add on, live voice communication from the cockpit was played, giving whole real flight experience to the ground. It was a complete with almost three hours non-stop flying that captivated the hearts and minds of many.

While the performance showed the capabilities, it also displayed how the team responds to search and rescue operations. What an awesome education lesson for the thousands who braved the heat. 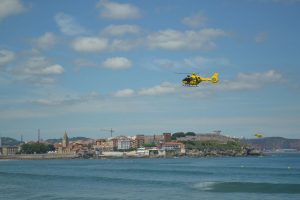 Flying EC135 and AS350 helicopters, Asturias fireman demonstrated how fire is put out in the case of disaster while CN125 and AW139 helicopters were deployed to demonstration how sea rescue is carried out in the event of a search mission.

To reiterate, it is more than just an eye-catching air show in Gijon, in Spain.It’s truly a family-affair and you will always feel the serious and sincere heartbeats because it is meant to showcase the best of aerial flying without having to match the prestigious billion-dollar international aerial shows hosted by the super-powers.