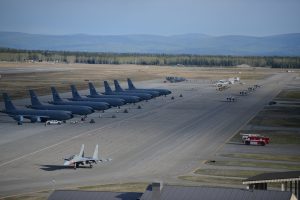 Alaska USA. 11 May, 2016. Col William Culver 354th Fighter Wing Vice Cdr said “I compliment the exceptional standards displayed by the IAF and am amazed to see all the ten aircraft  IAF had brought (4 Su30s, 4 Jaguars and 2 IL-78s) maintaining 100% serviceability for the entire four weeks and their aircraft flying on all days as per plan”. He was speaking at the closure of Exercise Red Flag Alaska 16-1 .

An advanced aerial combat training exercise hosted at Eielson Air Force Base, Alaska (a successor to the previous COPE THUNDER exercise series) held in the Alaska region, concluded on 14 May 16. The main phase of the exercise had commenced on 28 Apr 16 with a mix of combat and support elements participating from IAF, USAF and USN. 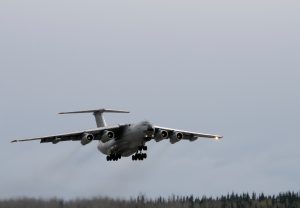 Over the last decade, IAF has been actively participating in various operational exercises hosted by various countries wherein its capabilities has been pitted against the best air forces in the world. While referring to the overall exercise plan and objective Red Flag Alaska 16-1 the Team Leader Gp Capt H Assudani said, “(the) Objective of this inter-continental deployment was not only to showcase IAF capability in undertaking Integrated Air Ops but also to imbibe operational lessons from the exercise engagements which will help us add more teeth to our overall war waging capabilities”.

The exercise is played under multiple simulated scenario designed to provide realistic settings. The overall demarcation is between Red Force (simulated as the Defensive force component fighting to protect own airspace and assets) and the Blue Force (simulated as the Offensive composite package). The Red Forces was mainly constituted by the 18 Sqn Aggressor Sqn flying the F-16s. The IAF along with the other USAF (F-15, F-16, F-22) and USN (F-18) constituted the Blue force. During the exercise IAF also flew as a part of the Red Force alongside the Aggressors which was a first of its kind. 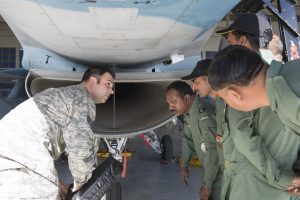 There were three missions commanded by Indian Airforce in this exercise. Mission commanders of both the Jaguars and Su 30s were involved in planning, execution and conduct of debrief. One of the missions was commanded by Sqn Ldr Sidhu, who while speaking on the mission said that “it was a great opportunity to lead all the coalition forces. It gives one an immense satisfaction when all the participants execute the briefed plan which becomes a success”.

While talking about the IAF in the red flag exercise Lt Col Brian Toth, Chief operations officer of 354 operations group said “ The IAFs participation has been extremely good from my perspective. For most nations it takes an exercise or two to step up to meet the requirements of a Mission commander. The IAF has been mission commander three times and also performed the package commander roles and they have done a tremendous job”.

During the exercise a set of Red Flag team formed the `white Force’ & using high tech instrumentation and mission debrief tools were used to evaluate the performance of the participants in an objective and logical manner. The White Force watched the entire exercise in real time on tactical displays in the operations room on ground. Kill removal (removal of the pilots and aircraft assumed shot by the enemy) made the exercise more realistic.

The temperatures were sub-zero during a large part of the exercise which posed a challenge to the maintenance team. The team kept all the aircraft fully serviceable and mission capable at all times. It is noteworthy that despite the challenging environment, the maintenance team ensured 100% serviceability of all platforms throughout the four weeks. Lt Col Clarence McRae, the RED FLAG-Alaska 16-1 Expeditionary Forces Maintenance Group commander said “RED FLAG-Alaska provided all of the participants a fantastic opportunity to train with members of the Indian Air Force.

The exchange of lessons learned and best practices with our partners in the Indo-Asia-Pacific region have enabled us to strengthen our partnership and signifies our commitment to this area of operations. The professionalism of the IAF airmen made bolstering our countries’ relationship easy and helped provide realistic combat training for all participants”. The Senior Engineering Officers of the IAF units were happy with the comprehensive IAF technical practices which are well defined and meticulous. Adherence to these have ensured a high tarmac availability that allowed aircrew to perform their missions. Wg Cdr Pratyush Anand, SEO of SU-30 Sqn said, “out of box thinking of the technicians has earned praise from all quarters. The participating airmen got an opportunity to see a variety of aircraft and this exposure and interaction with other fleets will go a long way in evolving our own practices”.

Wg Cdr Saumitra Tamaskar Exercise Director said “Having set out with well-defined objectives, the IAF contingent’s effort over the past month has ensured that they take back important lessons which will help undertake operations across a wide and diverse spectrum and meet any future challenges”.

The Contingent will start their de-induction phase on 14 May 16 and are planned to return to India in the last week of May 16. The Su-30s will additionally participate in exercise ‘Desert Eagle II’ with UAE Air Force on their way back.