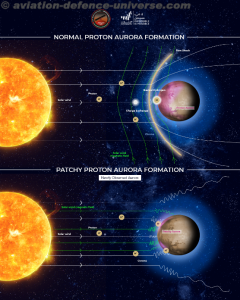 Dubai, UAE. 31 August 2022. The Emirates Mars Mission, the first interplanetary exploration undertaken by an Arab nation, has made first observations of a new type of proton aurora around Mars. The spatially variable ‘patchy’ proton aurora potentially triggers new insights into unexpected behaviours in the Martian atmosphere. The EMM team has worked together with NASA’s MAVEN (Mars Atmosphere and Volatile Evolution) mission to fully characterise these observations. The combination of EMM’s unprecedented global aurora images with MAVEN’s simultaneous local plasma observations opens up new avenues for understanding the drivers of Mars’ enigmatic aurora. 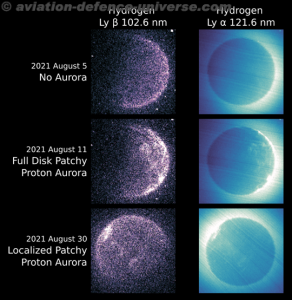 challenges our existing views of how the proton aurora on Mars’ dayside are formed,” said Hessa Al Matroushi, EMM’s Science Lead. “The EMM Hope probe has so far uncovered many unexpected phenomena that extend our understanding of Mars’ atmospheric and magnetospheric dynamics. These new observations, combined with MAVEN data, have lifted the lid on entirely new possibilities for scientific research.”

This new patchy type of proton aurora is formed when the solar wind directly impacts Mars’ dayside upper atmosphere and emits ultraviolet light as it slows down. It was discovered in snapshots of the dayside disk obtained by the Emirates Mars Ultraviolet Spectrometer (EMUS), which observes the planet’s upper atmosphere and exosphere, scanning for variability in atmospheric composition and atmospheric escape to space. The aurora manifests as bright regions scattered across the dayside of the planet in two ultraviolet wavelengths associated with the Hydrogen atom, Lyman beta at 102.6 nm and Lyman alpha at 121.6 nm. Under normal conditions, the dayside disk of the planet at these wavelengths is uniform, and the planetary brightness results from Hydrogen atoms scattering sunlight. When the aurora occurs, small regions of the planet become much brighter at these wavelengths, signifying intense localized energy deposition in the atmosphere.

“We’ve seen emissions at these wavelengths before, thanks to proton aurora studies by NASA’s MAVEN mission, but these EMM EMUS images represent the first time we’ve had a global view of spatial variability in proton aurora at Mars, and the first time we’ve been able to unambiguously observe this patchy structure,” said EMM science team member and lead author of a newly submitted paper on the proton aurora, Mike Chaffin. “We know that these wavelengths are only emitted by the Hydrogen atom, which tells us that super energetic Hydrogen atoms must be present in the atmosphere in order to produce the auroral emission.”

A data sharing agreement between EMM and MAVEN has enabled analysis of the new EMM images using plasma observations made by MAVEN, which has been characterizing the Mars ionosphere and magnetosphere since 2014. MAVEN carries a full suite of plasma instruments, including a magnetometer and two ion electrostatic analysers that measured the Martian plasma and fields environment during EMM’s observations of patchy proton aurora events.

“Multi-vantage point measurements of the Martian atmosphere tell us about the real time response of the atmosphere to the Sun. These types of simultaneous observations probe the fundamental physics of atmospheric dynamics and evolution”, said MAVEN Principal Investigator Shannon Curry.

“Access to MAVEN data has been essential for placing these new observations into a wider context. Together, we’re pushing the boundaries of our existing knowledge not only of Mars, but of planetary interactions with the solar wind,” said Al Matroushi.

Martian proton auroras were originally discovered by MAVEN and subsequently found in data from ESA’s Mars Express mission, but most of these previous observations show uniform auroral emission across the dayside of the planet. By contrast, the EMUS observations are able to unambiguously reveal small-scale spatial structure. Scientists from both teams now believe the patchy aurora can only be produced by plasma turbulence in the space surrounding Mars. “Because of the size scales involved in the solar wind and extended hydrogen atmosphere of Mars, there’s no way the standard proton aurora formation mechanism could produce the aurora we’re observing with EMUS,” said Chaffin. “In the August 11 observations the aurora is so widespread and so disorganized that the plasma environment around Mars must have been truly disturbed. Thanks to MAVEN measurements of the Mars plasma environment simultaneous with the aurora, we can confidently say that the solar wind is directly impacting the upper atmosphere wherever we’re seeing auroral emission,” he added. “What we’re seeing is essentially a map of where the solar wind is raining down onto the planet.”

The simultaneous observations of patchy proton aurora by Hope and measurements of plasma conditions by MAVEN are therefore a window into rare circumstances, when the interaction between Mars and the solar wind is unusually chaotic.

Hope has observed patchy aurora multiple times over the course of its mission so far, and the shape of the aurora is not always the same. On 2021 August 30, for example, the patchy proton aurora was confined to a much smaller portion of the disk than on August 11, suggesting a different mechanism may be at work. Plasma turbulence at Mars can occur under a variety of conditions, and different shapes of patchy proton aurora may reveal different plasma conditions.

As of June 2022, Mars is about a month away from the peak of its Southern Summer, when proton aurora are known to be at their most active. “Whether we’ll see anything as spectacular as what we’ve already got is anyone’s guess, but I’m hopeful. Hope continues to far exceed our expectations for scientific discovery, and I can’t wait to see what we learn next.” said Chaffin.

Top image shows the normal proton aurora formation mechanism first discovered in 2018. White lines show that solar wind protons traveling away from the Sun are normally swept around the planet by the Mars magnetosphere, and don’t directly interact with the atmosphere. When proton aurora occur, a small fraction of the solar wind collides with Mars hydrogen in the extended corona of the planet (shown in blue), and charge exchanges into neutral H atoms. These newly created H atoms are still travelling at the same speed, and are no longer sensitive to the magnetospheric forces that redirect protons around the planet. Instead, the energetic H atoms slam directly into the upper atmosphere of Mars and collide multiple times with the neutral atmosphere, resulting in auroral emission by the incident H atoms (purple). Because the solar wind and Mars corona are uniform across the planet, the aurora occurs everywhere on the planet’s day side with a uniform brightness.