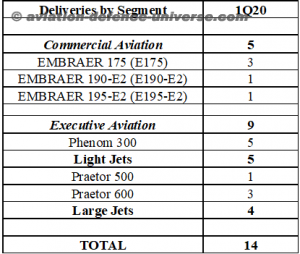 São José dos Campos , Brazil. 12 May  2020 . Embraer delivered a total of 14 jets in the first quarter of 2020, of which five were commercial aircraft and nine were executive jets (five light and four large). As of March 31st, the firm order backlog totaled USD 15.9 billion.

Historically, Embraer seasonally has fewer deliveries during the first quarter of the year, and in 2020 in particular, the commercial aircraft deliveries in the first quarter were also negatively impacted by the conclusion of the separation of Embraer’s Commercial Aviation unit in January.

During the first quarter, Embraer Executive Jets announced that the new Phenom 300E was granted its Type Certificate by ANAC (National Civil Aviation Agency of Brazil), EASA (European Union Aviation Safety Agency) and the FAA (Federal Aviation Administration). The new Phenom 300E is the recently enhanced version of the Phenom 300 series, which was the most delivered business jet series in the 2010s.

Also in this period, Emgepron, a Brazilian state-owned company linked to the Ministry of Defense through the Brazilian Navy Command, and Águas Azuis, a company created by thyssenkrupp Marine Systems, Embraer Defense & Security and Atech, signed the contract to build four state-of-the-art Tamandaré Class Ships, with deliveries scheduled between 2025 and 2028.